A great article on Lusaka... 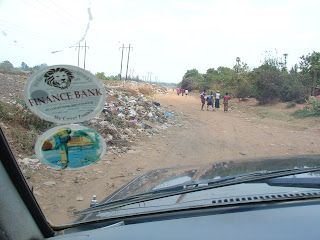 This was written in the World Magazine. This is a great article for understanding what we are heading into...

Gardening and garbage
by PRIYA ABRAHAM
Rapid and unplanned growth means a basic problem for cities like Lusaka: Who will take out the trash?


LUSAKA WAS A HUMBLE TOWN when it became Zambia's capital in 1935. Three decades later one colonial observer said it looked like it had been "dumped in the middle of the African bush." That was right before inde­pendence from Great Britain in 1964; even then, Lusaka was a backwater compared to other African capitals like Nairobi.

Today the city named for a local village headman is the size of Detroit, but the original city plan has changed little. The city center still has the same north ­south design with two roundabouts built along Cairo Road, the main street. The once­ gleaming buildings just look older and more tired, while dirt and rush-hour traffic clog the once-calm street grid. Lusaka was a "Garden City" in its early days, named for the British colonial design that favored open green spaces. Now, residents joke, it's the Garbage City.


The reason for its decline is the same as for many African capitals today: a massive spike in population without matching growth in roads, schools, hous­ing, or hospitals. Zambians from towns and villages flock to Lusaka to work, viewing it as the nation's New York-the big, bustling city. A city built for a few hundred thousand has now swelled to between 1 million and 2 million. That means almost three-quarters live in slums called "shanty compounds," warrens of small cinder-block shacks topped with tin-sheet roofing.

Most Westerners can take for granted the mundane: city sanitation, trash pick-ups, and street sweeping. But underdeveloped cities like Lusaka often cannot, and the stakes climb as the garbage piles do. Badly disposed garbage poses health hazards and even affects local politics: In Lusaka, residents complain about overflowing street vendors who block and further add to dirty roads. Clearing them off, how­ever, is a tough sell when they vend to survive and are often important political party supporters.


For all their hopes of finding jobs upon arrival, most Lusaka residents end up selling things to survive. In the vast, open-air Soweto Market in the city center ­built by flummoxed authorities to curb street vending-marketable items could be anything from secondhand sweat­shirts to corn on the cob. Traditional healers, now tech-savvy, tote cell phones to ply their trade, and regularly run classified ads that promise cures for impotence, joblessness, and unrequited love.


The irrepressible street vendors roam between cars stopped at traffic lights, hawking beach towels, Scrabble boards, and boxes of red grapes-anything they can hold in two hands. Street children as young as 4 tap on car windows for money, often in sight of the Cairo Road billboard that warns motorists not to give to beggars. If they glean any change, older, hardened boys calledpondo, or "savages," often steal it away.
Only in such a burdened city, then, could trash and how to get rid of it become a local absorption. Once-clean streets are now littered, and the shanty compounds are infamous for creating monuments of trash.

Water sanitation in the shanty compounds is a headache complicated by the garbage problem. Shanty com­pounds turn muddy during the hot rainy season, and in some, shallow well water mixes with human waste from pit latrines and brings yearly outbreaks of cholera. With the rains come equally predictable health warnings to boil drinking water, though careful residents do so year-round.


On the trash front, at least, Michael Kabungo seems tired of the "Garbage City" taunt. It's easy to see why: He directs the Waste Management Unit at Lusaka's City Council. In other words, he has to collect the trash.


Kabungo acknowledges that the much­-pilloried city council rarely collected garbage for years, particularly when the municipal tax system unraveled in the early 1990s: That was when a once­ socialist Zambia switched to a market economy. Residents often resorted to digging pits in their yards and burning their refuse. Now, he says, his unit­ funded by grants from the Danish government-is doing a better job.


Just four years old, Kabungo's unit has created a franchise system in which pri­vate firms collect garbage for the city in 12 Waste Management Districts (called WMDs for short, obviously). Where once the city collected less than 15 percent of Lusaka's garbage, it now collects about 45 percent. Lusaka, said Kabungo, is "much, much cleaner than it used to be."


If the collection figure still sounds low, it's partly because Lusaka has a few other quirks. Some collection fees for shanty compounds are as low as $2 a month for each household, but some residents still cannot -or will not -pay for the service. In some shanty compounds, Lusaka residents have taken to burning the rubbish inside their Dumpster-like communal bins-less garbage means fewer pick-ups to pay for.


Poor countries often fight to prevent locals from stealing or vandalizing public property, and Zambia is no different. On Lusaka's streets, thieves stole the portable garbage cans Kabungo's unit trotted out. Kabungo has to come up with concrete bins with metal liners that open only with a key, but for now, those are still in the design phase.


If garbage collection in Lusaka is at least on the road to improvement, the city's wealthier side is prospering more. A hugely popular strip mall called Manda Hill opened seven years ago on the Great East Road, a major highway that runs almost 400 miles from Lusaka to Malawi. There's Game, a Wal-Mart-like South African chain; an Irish pub; and a Subway, the only American fast -food chain in the country. The spot draws well-to-do locals, expatri­ates, and ever-present Western aid workers who come ostensibly to solve Africa's woes, along with dazed tourists who unwind after roughing it through the continent. Up the road, a new movie theater offers $2.50 matinees on the latest Hollywood and Bollywood flicks, and an always ­packed internet cafe charges about 4 cents a minute to use its high-speed internet.

Wealthy Lusaka residents-who would be middle-class by American stan­dards-live in peaceful suburbs east of downtown in homes bordered by razor­wire-topped walls to deter burglars. Water tanks in yards compensate for the city's fickle supply, and these residents usually hire maids and gardeners who commute in from shanty compounds.

Aid from Denmark has helped jump­start Lusaka's garbage collection, but changing local attitudes will take longer. Most residents have gone so long without paying for trash collection-even through taxes-that doing so is a new concept. Litterbugs may toss their trash on the roadside but believe it is the city's fault alone that streets are dirty.

Kabungo says a public awareness "Keep Lusaka Clean" campaign is helping. In other small ways, he said, the practical wins out: More crowding means some residents no longer have room to burn trash in their yards and will pay for trash collection instead.


Much of Lusaka looks as it did at independence and keeps its small-town feel. But multiplying shanties along with flourishing strip malls show the city has a more checkered story. New policies may help uncollected garbage to slowly dwindle, but with a rapidly increasing population and without a city plan, Lusaka may be a long way from return­ing to its original garden state. ~