An insightful article in to Africa and America - Worth the read! 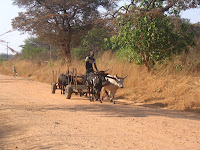 Experiencing Life at the Margins
An African bishop tells North American Christians the most helpful gospel-thing they can do.
Interview by Andy Crouch

If you want to ask the Rt. Rev. Dr. David Zac Niringiye what's new in his ministry, allow some extra time. As assistant bishop of Kampala in the Church of Uganda, Zac oversees churches that are enjoying tremendous growth and confronting pressing needs. He and his wife, Theodora, counsel Ugandans who have suffered the trauma of war, advise startup businesses throughout Africa, and nurture Christian student movements and evangelistic efforts. His contributions to spiritual and cultural renewal in Africa alone would make him a valuable respondent to our big question: How can followers of Christ be a counterculture for the common good?

But Zac, a protégé of evangelical leader John Stott, also has cultivated deep relationships with Christians in the West, beginning with theological studies at Wheaton and Edinburgh. As a senior adviser to Geneva Global—another product of Stott's far-flung network of students and friends—Zac is creating international partnerships that model the candid challenge he offers to American Christians in this interview.

As a longtime friend and partner of North American Christians, what have you noticed about us?

One of the gravest threats to the North American church is the deception of power—the deception of being at the center. Those at the center tend to think, "The future belongs to us. We are the shapers of tomorrow. The process of gospel transmission, the process of mission—all of it is on our terms, because we are powerful, because we are established. We have a track record of success, after all."

Yet recently the Lord led me to an amazing passage, the encounter between Jesus and Nathaniel in John 1. Nathaniel has decided Jesus is a non-entity. Jesus comes from Nazareth, after all.

Nathaniel's skepticism comes from being in power, being at the center. Those at the center decide that anyone not with us is—not against us—[but] just irrelevant. "Can anything good come from Nazareth?" It doesn't warrant our time. But the Messiah is from Nazareth.

What's the problem with being at the center?

God very often is working most powerfully far from the center. Jesus is crucified outside Jerusalem—outside—with the very cynical sign over his head, "The King of the Jews." Surprise—he is the King of the Jews. "We had hoped … " say the disappointed disciples on the road to Emmaus, but he did not fulfill our criteria. In Acts, we read that the cross-cultural missionary thrust did not begin in Jerusalem. It began in Antioch, on the periphery, the margins. But Jerusalem is not ready for Antioch! In fact, even when they go to Antioch, it's just to check on what's happening.

If you really want to understand the future of Christianity, go and see what is happening in Asia, Africa, Latin America. It's the periphery—but that's where the action is.

But many American churches are already deeply involved in missions overseas.

Of course. Yet it's so difficult to get American Christians, even those who profess to love missions and their brothers and sisters on the periphery, to actually come and see what is happening where we are. This is especially true of those in the positions of greatest power in the church. I have asked a friend, a pastor of a large church that gives half of its money to missions, to come and spend time on the fringes. But he won't. He wants to spend his study leave in Oxford, in Australia. How can American pastors be leaders if they haven't seen what God is doing elsewhere? Every search process for a senior pastor should ask, "Do you have experience in marginal places, economically deprived places, places with HIV/AIDS? Have you gone to be among them?"

What could equip us to be more countercultural, living in a nation that is very much at the center of power?

We need to begin to read the Bible differently. Americans have been preoccupied with the end of the Gospel of Matthew, the Great Commission: "Go and make." I call them go-and-make missionaries. These are the go-and-fix-it people. The go-and-make people are those who act like it's all in our power, and all we have to do is "finish the task." They love that passage! But when read from the center of power, that passage simply reinforces the illusion that it's about us, that we are in charge.

I would like to suggest a new favorite passage, the Great Invitation. It's what we find if we read from the beginning of the Gospels rather than the end. Jesus says, "Come, follow me. I will make you fishers of men." Not "Go and make," but "I will make you." It's all about Jesus. And do you know the last words of Jesus to Peter, in John 21? "Follow me." The last words of Simon Peter's encounter are the same as the first words.

Can we begin to read those passages that trouble us, that don't reinforce our cultural centeredness? Let's go back to Matthew 25 and read it in the church in America, over and over. Who are Jesus' brothers? The weak, the hungry, the immigrant workers, the economic outcasts. Let's read the passage of this woman who pours ointment over Jesus. Let's ask, who is mostly in the company of Jesus? Not bishops and pastors! The bishops and pastors are the ones who suggest he's a lunatic! Who enjoys his company? The ordinary folk, so ordinary that their characterization is simply this: "sinners." Can we begin to point to those passages?

Yet this ability to read different passages, to read the Bible differently, won't happen until people are displaced from their comfort zones. I thank the Lord for deep friendships he has given to me beyond my comfort zone, beyond my culture, beyond my language. Until that happens, we will all be tribal, all of us.

Many of us want those relationships beyond our own tribe, but how does that happen?

It is very simple. Come and be with us, with no agenda other than to be with us. One friend of mine by the name of Mark, a pastor of a large church, amazed me when he came to visit. He came for three weeks, and he said, "All I want is to come and be with you." At first, I didn't believe him.

"Zac," he said, "wherever you go, I want to go. I'm not asking what I can do—I just want to come and be with you." So he came. We went to an HIV/AIDS clinic, and they asked us to pray. I had introduced him as Rev. Dr. So-and-So—I couldn't just be praying and have him be standing there. So I said, "Mark, you start there, laying hands on all these AIDS patients, and I'll start here." I didn't ask him for permission—I just told him to do it, because that's what you do. And he did.

We went to northern Uganda, where the civil war is causing such suffering. And Mark didn't ask, "Is it safe for me?" That amazed me. If it was safe for me, then it would be safe for him. He was not unaware of his power, as a mzungu, and that people would think he has a lot of money.

He asked me, "What should I say? What would be appropriate?"

And I tell you what. He did just that. He was so humble. Of course, there are leaders who come to Africa, who go to Asia, and they come away the same. In fact, they come away worse, with a greater sense of how they are going to change the whole world! But we lose our legitimacy as Christian leaders in an affluent country like [the U.S.] if we can't use that affluence in order to experience the situation of those on the margins. "God so loved the world"—how dare we say we identify with him in that love if we don't go there, if we don't choose the margins?

What part does racism play in all this?

You never discover how racist you are until you have the opportunity to be a racist. The genocide in Rwanda was a very challenging experience for me. I came to Washington in 1995, and some friends were asking, "What do we do in Rwanda?" They were saying, "What do we do with these Hutus, who are such killers?" As if the Hutus were created killers! "Actually," I said, "I am Hutu." I share an ethnic identity with them, as does most of southwest Uganda.

And until I got to Rwanda, I didn't realize how sympathetic I had been to the Hutu cause. Then it hit me. And I began the journey of being freed from that—freed from that history of sympathy for a cause that was just Hutu. Until the opportunity is given to you to face your own racism, you'll function under its power, under its spell. The only way to lose it is to go.

What do Americans need to understand about the main challenge facing Africa?

Africa's crisis is not poverty; it is not AIDS. Africa's crisis is confidence. What decades of colonialism and missionary enterprise eroded among us is confidence. So a "national leader" from the United States comes—he may have a good-sized congregation, but he knows nothing about Africa!—and we defer to him. We don't even tell him everything we are thinking, out of respect. We Africans must constantly repent of that sense of inferiority.

With its tremendous growth, how is African Christianity countercultural?

With all the growth of the African church, we are still facing the prospect of being a religious minority. It may be that in fifty years' time, Africa will be predominantly Muslim. One hundred years ago, Europe and America decided to take over Africa. They marshaled economic power, manpower; they transported their culture, education, and religion. Now sub-Saharan Africa is culturally Western. And Muslims today are applying the same energies to sub-Saharan Africa.

In Uganda, they are succeeding. Muslims are buying property in Uganda; they are sending their brightest young people to law school. They have established amazing charitable organizations. The mosque in Kampala will be opened soon by Libya's President Qaddafi. It occupies the most central place in the city.

The temptation will be to try to apply power, to try to overcome the incursion of Islam. But that's not the way of the Cross. That's not the way it happens. Remember when Jesus and his disciples were passing through the village in Samaria? For many Christians, the Muslims are like Samaritans—a minority that has left our faith and holds to a different faith. When the Samaritans were not hospitable to Jesus, the disciples said, "Just call fire down and blow these guys up!" Yet it's the Samaritans who listen to the woman who met Jesus at the well. Later in Acts, the same apostles go to the Samaritans.

The situation in America and Africa is not so different. Recently, an American evangelical leader said to me, "In a few years' time, it's going to be very difficult for anyone who wants to be a disciple of Jesus in America." But I said to him, actually, no, it is very difficult now. If you are truly a disciple of Jesus, it is very difficult. The same is true in Africa. When I speak in some countries where Islam is powerful, they shout me down. The Bible says, "When somebody strikes you on the right cheek, turn the other cheek"—but they ask me, "What happens when there are no more cheeks to turn?"