Jesus Must Have Meant Something Else - A blog thought found online... 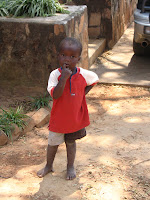 Jesus must have been intending something deeper when he said that the poor will inherit the Kingdom of God. He didn’t actually mean that. He must have been meaning something else when he said it is easier for a camel to get through the eye of a needle than it is for a rich man to get into heaven. He must have been using hyperbolic language when he said the poor will be blessed. He must have meant something else when he told the rich guy to sell everything. He of course meant to make sure his investments were in order; RRSP’s were caught up so his retirement was taken care of, his children’s college fund was generous and he had his cars and house paid off first, got a few extra gadgets for himself, take a few homeless guys out for Big Macs and then give away certain blocks of money every month, and then write the church in his will at the end of it all.

Jesus must have meant something else when he said that he came to serve all. He must have meant something deeper than the mundane action of washing feet. He must have meant sharing with people their need for salvation. I’m sure that when Jesus said the least will be the greatest he was saying that about us when we get to some other world and not right now. Or maybe if we say enough false humbling things about ourselves we will have convinced everyone around us that we “aren’t perfect” and that is what God meant when he said that last shall be first. I’m sure when Jesus said to be like a child; he didn’t mean be irresponsible, irrational, impatient, curious, chaotic and undependable. He must have meant to be cute, cuddly and innocent.

I’m sure when Jesus picked the outcasts of society to be his disciples he was thinking “I hope my followers do the opposite by believing and practicing that outstanding citizens, tithers, straight A students and athletes are the best disciples.” I bet when Jesus said that we didn’t clothe him when he was naked because we didn’t clothe the least of these, he was making sure we would drop our clothes off at the Goodwill when we were done with them. When Jesus honored the women who gave everything she had he was trying to give a lesson that we need to sponsor a child and tithe 10%.

Jesus was certainly a confusing fellow. He says so many things that are so hard to understand. I’m glad there are people around that can explain all the confusing things he says. Who would have thought that when he said to be the one that serves he meant to be an usher and run the nursery?

Find this blog at www.nathancolquhoun.com