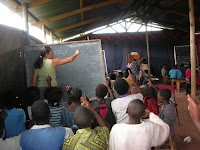 is a country in south central Africa; it’s a little bigger than with a population of about 11 million.

- English is one of eight national languages; the native language spoken in is Bemba.

- Although officially a Christian nation, up to half of the population follow Islam, Hinduism, or traditional ethnic religions.

- The primary industries are mining, agriculture, and tourism.

the streets, many due to death and abandonment from AIDS.

- , the largest waterfall in the world is located in the southern part of the country.

- Zambia is second in the world to Uganda with the highest number of children being orphaned due to AIDS. It is estimated that 34 percent of all children under the age of 15 years are orphans. Approximately 80 percent of the population in rural areas lives below the poverty line and more than half of the children are chronically undernourished.
Posted by Steve Allen at 8:40 PM

Email ThisBlogThis!Share to TwitterShare to FacebookShare to Pinterest
Labels: About Zambia