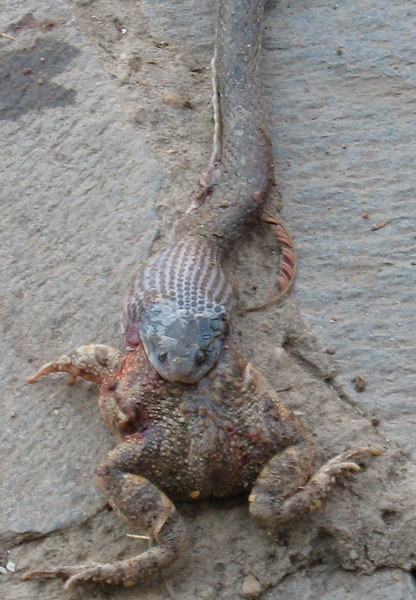 A cobra! Yep, right on the back patio. Yesterday I was in the house teaching the girls when Miriam came in and asked me if I would like to see the snake they just killed. I went out to see this snake with a HUGE frog in its mouth. The guard had already killed it but the snake was still trying to eat the frog. Its mouth was trying to move. His dinner was brought to a very abrupt end. I asked what kind of snake it was and they told me it was a Cobra. But, I didn't really believe them because I had been told that the Zambians call every snake a Cobra. I took the picture to show Steve when he got home. Today, Steve brought a friend of our mission agency by (he was a white Zimbabwean farmer who was booted out of the country and now runs a mission agency a few hours south of Lusaka) and he looked at the picture and confirmed that it was actually a cobra. Crazy huh!!! You may ask why we are telling you these things if we ever hope to have visitors. I'm not exactly sure, I just thought it was such a cool story. God is watching over all of us! Please still come visit!
Posted by Steve at 11:57 AM

"Cobra" is the word for snake in Portuguese, as well. So in Mozambique and Brasil, they call every snake a Cobra. Can get confusing! Steph, I can sympathize with you about the cooking. we had to soak our vegatables in vinagar every day. and so many ingredients (such as baking chocolate or cocoa) are very different in Brasil.

It sure is neat to see how you are acclimating though! Press on!

I don't know if the snake or the giant frog looks more daunting! Thanks for keeping us connected in the details.