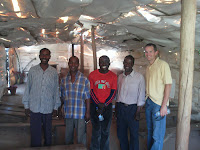 I went with Graham Melville, a fellow Action missionary, working with pastors and church leadership and a man named Vosco, a disciple of another Action missionary and a former street kid. Vosco was our boss and his plan was to give us a tour of some of local compound churches as well as community schools and street markets. I didn't bring my camera so I am hoping that my english words will paint a picture for you what I experienced today. Our first stop was a church called Emmasadale Church of God in the Chaisa compound. This was where I spoke during the conference last October. We went to the house of Pastor Mark Mwale and over coke and sprite, caught up, talked about this church, and talked about future conferences. One cool thing that caught my attention was the 60 bricks stacked up outside the church. When I was there last October, I asked about the 15 bricks were that were stacked up outside his Church and he told me that they the members of the congregation were bringing the materials for the new church, brick by brick. Progress is slow in the compounds, but I love their perseverance. When we were talking, one of the pastors whom I recognized from the conference last year came by to visit. I remembered him because his wife was this most amazing worship leader, dancing and singing with all the groove one can muster... Anyway, he invited me to speak at his church of 70 in two weeks. We went and saw the church. The picture above is the church where I will be. The pastor of that church is on the far left. I am on the far right (yeah the one with my shirt caught in my belt:) It was unreal. We then went to a community school where Action helps provide food, teacher training support and encouragement. We saw about 100 kids crammed into a room the size of my living room with a two sheet put across the room to section off four "classrooms" with a first, third, fourth and preschool class. These kids were from the surrounding areas and some were orphans and some were living with one or both parents. This is one of four schools that Action is weekly a part of... It was really cool. We then went to a place called Fountain of Hope. It was a drop in centre that Vosco actually went when he left the streets. There must have been 400 hundred kids in classes, playing basketball, drinking water and walking around. From there we went and visited a man who was dying of AID's, and Graham through a contact, knew of this man. Graham shared the love of Jesus and the free gift of eternal life. This family of this man invited us for lunch. We hardly knew them but they are a very hospitable people. They provided a huge lunch of Nshima and liver and a relish. It was really good. From there we went to the Suetto market and city market. For anyone who has been to a third world street market, you will somewhat have an idea of what we experienced. Walking with Vosco, we got the tour of the whole place. We saw street kids sleeping on each other on the pavement, people selling goats and fish and products. It was loud and hot and crazy busy. We were the only white people I saw all day. It is hard to describe really just the chaos and the mundaneness of what I saw, ladies selling tomatoes, sitting in the hot sun, sitting on pavement, alongside 20 other vendors of tomatoes. The wind would pick up and sand and dust would fly across the road. As we drove home, I just was really thankful for an organization like Action who devotes their time to helping the poor and their pastors. These are the down and outs, the lowly, the nobodies, and yet they are people, God's people, and I feel priviledged to be a part of their lives. Overall, it was an overwhelming day. It is hard to believe that people live like this and though I have been on many mission trips, I am realizing that I have been blind to the suffering in the world for so many years. I hope to have more pictures and videos for you later... Thanks for your prayers!
Posted by Steve at 11:01 AM