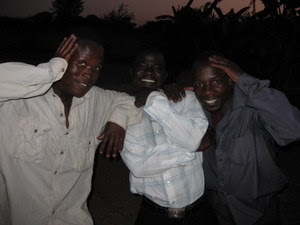 It was a good day today. We had a great family worship time on what it means to fear God. My study of Philippians this morning was great, I picked up 18 more packages for our Christmas orphan party at post office during lunch and then we had our Pastors study at 2:00pm.

I was very curious to see what these pastors would come up with and to see if they were "getting" the inductive process. And sure enough, they did. They had done the work, they struggled with it, and it led to some great conversation. At the end of the time, I asked if anyone had any comments. One of the pastors, Peter, asked if anyone had ever studied like this before or ever taught expository preaching like this? No one raised their hands. He then said to me, "this is an important thing we are learning. Zambia needs to learn how to study the Bible this way." Another Pastor echoed his sentiment and said that he was growing in confidence in his ability to understand the Bible. They shared some more and I was just humbled and thrilled. Yesterday was a really hard, discouraging day and I really needed that encouragement. Peter later said, "as you can see, (pointing to the back of the room where three more pastors showed up) many more are going to come because they want to learn this." I then said that once you understand, then you will be the teacher. I told them that this is what I want to see, is that you (I pointed to Peter) teach ten, and then you and you and you teach ten, and we will be able to help the pastors learn how to study and teach the Bible. I then said, "There are many people in your churches who do not know how to read. The only word they are going to get is from your lips. This a high responsibility and you need to study hard to teach the whole counsel of God." They all nodded and agreed verablly. It was really encouraging. We will meet again on Thursday to begin the process of answering the questions. (I just had a thought: I wonder how many of you reading this do not really know the beautiful process of inductive study? If you don't please email me at sskbjallen@gmail.com and I would love to send you some information I put together.)

After the study, I went and bought four 25 kg bags of mealie meal at Shoprite. At the end of the month we buy a bag of mealie meal (which makes the Nshima, the staple food here in Africa) for the guards and Miriam. It helps supplement the food budget and it is one of the benefits of working for Action Zambia. On the way to deliver to the houses, we were jamming out with Garth Brooks-(I am preparing myself for your country music CD that you are sending me, Jerrad:) I asked Miriam if she knew country music and she said, "Oh, yes, I love country music. My father used to play it all the time." Whatdya know about that... Country music in Zambia.

Anyway, we dropped off the mealie and we gave her an extra mattress that we were not using. She is a widow, and she has two kids. Her brother also shares her house with her. We then went to drop off mealie at Daka and Lungu's house, who live near each other. Daka was coming on to the night shift so we picked him up and we went to drop off Mwape. While we were waiting for Daka, Mwape pointed at my ipod and asked how it works. He asked, "You put music on here and it plays?" I explained how you put the songs from the CD on the computer and then transfer it to your Ipod. I said, "Whiteman's witchcraft..." He laughed. That is the name for all the gadgets us Mzungu's have... (As we drove away I was thinking about how simple they really have it... They have no idea how to use a computer, an Ipod is foreign and all the mumbo jumbo in the middle doesn't exist in their worlds.) Later during the drive I showed how the radio station is synced with the transmitter, and as I changed the radio station and the music went away, they oohed and ahhed. It was pretty funny.

After we dropped off Mwape, I told Daka that I wanted to share a couple of ideas... The first was a deal where each month 3 of the 4 employees that work for us would contribute a set amount to the fourth person. That means, for example, Daka would get k300,000 ($75) extra for his month. The advantage of this is giving someone the revenue during their month to either buy something expensive, pay health debts or start a business. It would mean sacrificing money during your off months, but if they could be content to live simply during those off months, it could help them a lot during that one month. This led into another conversation where I shared about the importance of saving money. In this culture, people are not afraid to ask for money. In fact, because there are aunts and uncles and cousins and brothers and sisters who have needs and more and more needs, no one keeps money, because if they have money, someone will ask for it and in this culture you are bound to give. Sounds a little crazy when I read what I just wrote, but it is very, very true which is how people get into downward cycle of debt, because emergencies happen and then they have to borrow money. It conflicts a bit with being generous as a believer, but, the point is that people don't save, because if they have money, they are culturally bound to give it away.

So, I asked about saving some money. He said, "Like what, open an account?" ( Can you imagine never having used a bank?) I said, "You give me some money each month, and I will keep it for you in a safe. When you need it for an emergency or for a purchase, I will give it to you. He was blown away by this option. I told him how Mwape wants to start a store. He said that he wanted to start a little store as well. I shared how the profit you make from your store, you can give to me. I then shared how he could buy a house instead of renting. By then, Daka was pretty fired up. He was like, "Thank you so much boss. Thank you so much." Like I have said before, it doesn't take much to really make a huge difference. I am encouraged to be able to help those that God has put in my life. I can't be a change agent for everyone in the world, but I can for those who God has put in my life. What a privilege to be a part of bringing glory to God in small ways.

Anyway, if you made it to here, thanks for reading.
Posted by Steve at 10:36 AM

I cherish my trips to your blog.

That was a good one!--Chapman