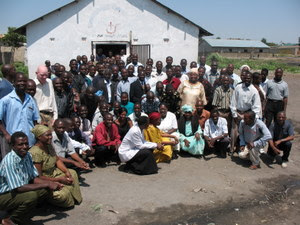 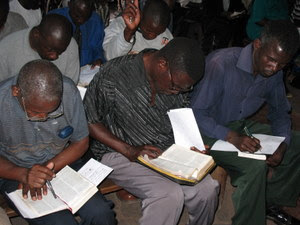 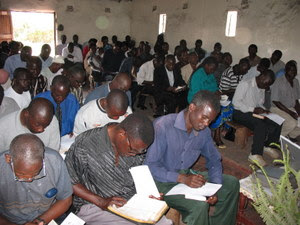 Well, the pastors conference is now over. I am exhausted but grateful, blessed, encouraged and amazed. It was a much different experience than my previous conference last year, I guess, because I now live here, I understand the culture better, and because I felt like it was my conference I was able to start and end and lead as I desired. It felt much like leading a camp, and I enjoyed those days very much, so it was good to be able to lead it like that. There were many highlights today for which I am so thankful. The first was during the morning session where I gave them the scripture Romans 12:14-16 and told them that this is your passage for your sermon on Sunday. Where before I had been giving them the answers, this time I just sat at my computer with the projector and typed what they gave me. And I was so encouraged that they actually got it. They did the inductive Bible study giving me the observations, interpretations, and applications of the passage. In fact, I got some insights from them that I had not thought of.

After three days of talking through the inductive and expository process, It was so encouraging to see them not only get it, but to see their enthusiasm and excitement as they began to learn how to study for themselves. During lunch I had a good conversation with a guy named Bruce and he was the one who was fasting for the crusade on Friday and Saturday. I was wrong. It wasn't two days that he had been fasting but for three days the entire church fasted in preparation for this crusade. We talked about Islam and its influence in Zambia. He said 5 years ago their were no mosques in Zambia, but now they are popping up everywhere. They are providing clinics with free medicine and community schools, and they indoctrinating the people and then they send the brightest out to universities outside of Lusaka so that they will come back and be educated and get into roles of leadership and government. He said there are now three million Muslims but in 15 years, he predicted that Zambia would be a Muslim nation... It occurred to me that we Christians could do the same thing. It was just amazing that the Islam nation is so strategic and purposeful in their approach to reaching and converting people. Their approach is singly-focused. It is as if their religion dictates how they live their life and what they do. They are Islamist first and government officials, doctors and teachers second. What a novel concept. I have been reflecting on a quote that I read a few days ago: "The biggest problem in the world today is not Radical Islam, it is nominal Christianity."

From a college friend who works with training missionaries...
There are 1.5 billion Muslims globally, yet there is currently only one Christian missionary dedicated to every 420,000 Muslims... Despite the overwhelming deficit, only 1% of the Church’s current missions budget is allocated toward equipping, and training missionaries and evangelization of the largest unreached people group in the world. Concurrently Islamic governments mobilize thousands of highly trained Muslim evangelists with a budget of over $80 billion dollars committed to evangelizing the West over the next 30 years.

I read these things and I am humbled and I am challenged even more as it correlates to the conference, to equip these pastors so they can love and share the good news of Jesus with their communities.
After lunch, we went back and I preached Romans 12:14-16 and it was great (when I say great, I guess I mean that the relationship were built, and we were like friends, talking through the passages.) At the very end of the message, I asked Victoria Sakala to come up and lead a worship song. I had prepped her before that I wanted a song that illustrated the idea of harmony, which we had just talked about. I wish you could have heard this song. I really mean it. You missed out. I have never seen such passion and energy and dancing in one place before. It was beautiful. Though I couldn't understand, I was loving it. Three people sang over their microphones and the rest hooted and hollered and sang with such joy. Clapping, dancing and worship just let loose like a floodgate and It poured out and it was amazing. You have to remember that these pastors and elders are leading churches in the most difficult of circumstances. Most if not all have other jobs to survive, their church members live day to day at best, many have HIV/AIDS and grief abounds. So, to be together with like-minded believers, and to focus on recieving instead of always giving, they were loving it. After the song was over and I came back up, I said with a smile, that" this is what I had in mind when I wanted you to sing in harmony."
I preached the next message, which led into communion. All 120 pastors and leaders filed up one by one to received Communion which I gave to them. We handed out the free commentaries to those who had been there all 3 days. Books like these are a treasure. I don't think you or I really can understand what it like to have a commentary book like this. I asked how many of the pastors had a computer. Only 1 person did. Very few have readable bibles, NIV or NLT or something like that. They have no concordance. You can imagine how difficult it must be to lead the church without something so simple as a concordance. During one of the talks, the translator went off and said maybe Action Zambia will provide some concordances for us. To give a little background, occasionally he would translate a sentence that would go on much longer than what I said, and after this one time, I heard a bunch of yahoos... I asked him what he said and he told me that he said maybe Action Zambia could give us some concordances. After thinking for a moment, I said, "O.K. this is what we will do. If you can come back next Wednesday, I will do my best to have a concordance for you." They all shouted and yelled and one guy grabbed the hand of the translator and shook it with all his might. (If they only knew all the books and concordances and bible tools that exist on computer, I would be embarrassed.)
Probably my favorite thing of the day was after everything was over, I was on the side sitting, thinking, staring down at the floor and the translator says to me, "Steve, we want to thank you for coming this week. You have preached the gospel to us in ways that we have never heard before. Ever since Zambia was a closed country, and even now, Zambia has been in the dark. You have taught us things we have never known before. Now we have two requests of you. Yesterday when Luke told us the Greek words to help us understand the true meaning, we realized we want to know Greek. Is there someone at Action Zambia would can teach us Greek?And second, we would like a bible that has both Greek and English so we can understand the original language. That was just really cool. I thought to myself, though, it has been a long time since I studied Greek...:) I'll have to bust it out again. This was my favorite because it just showed me that even though they are uneducated, they are not to be underestimated. Bruce today said, as we were talking about computers and how to get these tools into the hands of pastors, he told me what Africa is missing is information. I have been working Logos on how to bring bible training software to Africa and the opportunities are endless.
I gave a few pastors a ride home and one Pastor said how much Action Zambia has helped pastors with training. It is not easy to go to Bible School, due to costs, especially. He said that we are so grateful to you helping us. But what really encouraged me was when he said that Lusaka is so blessed, but that we need to go out of Lusaka to help the rest of the pastors. Basically, he was saying, you train us so we can train them..... AND THE CLOUDS PARTED AND THE ANGELS SANG AND WE ALL SAY HALLELUJAH!!!!! That was it!!! For them to have the vision, to be taught so that they can teach others, this pastor from Ngombe made my day. I didn't even get his name. But he wants to learn to teach expository preaching and would love to meet together weekly to teach through books of the bible. He had never thought of teaching the Bible like this before this conference.

As I dropped him off in the compound, three pastors who were at the conference rode by on their bicycles shouting and waving with huge smiles on their faces.
Posted by Steve at 11:59 AM