Back home from Kitwe... 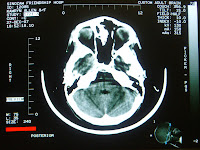 Kamryn and I made it back safely. The CT scan went really well and it shows what we hoped for, which is, nothing problematic!!! What a two day adventure. My little girl slept all the way up and part of the way back. It was sweet spending some time with my little girl. She is such a sweetheart. I think that is what hit me the hardest when all this concussion stuff is how much I take health for granted. It was just snatched from me and I just felt like, "Wait, this wasn't supposed to happen like this."

The scan went pretty smooth, and though Kamryn was a little panicked when they told her "Don't Move!" (They might as well have said, "Don't think of a pink elephant.") I ended up telling her a story and that helped her focus less on her and more on me which she later said helped her not to think about not moving. It has been a chaotic two days and I am glad to be home with a healthy daughter. It was a crazy trip north. I was stopped by police three times. The first I just left the hospital and was worried about my wife because I needed to leave her there. I was trying to call for a ride while stopped at a stoplight. It is against the law to talk on the cell phone will driving but I thought it would be o.k. if I talked while stopped. Not O.K. but I sobbed my story and I got out of it. I was stopped again as I drove north passing on this hill going down on a white line. There was only one white line instead of our two white lines and I didn't think it applied to me because I could see for miles that their was no car coming up. But, I again was wrong. I shared my sob story and got out of a second ticket. Then on the way home (as I neared Lusaka, I slowed down, cleaned my car, threw my cell phone out of my window and straightened my hair) and got pulled over, anyway. A speed trap caught my car which was going 95 kilometers (5 under the speed limit) for going 112 kilometers (doesn't make sense to me either). It was the same second ticket people and I showed him the CT scan pictures and asked him how fast I was going. He said, 112. I said, "There was no way I was going 112. No way." He let me go, again. So, all in all, getting out of my tickets paid for my diesel. Not bad. Kamryn said, "I know the reason he didn't give you a ticket. He felt guilty for just wanting your money:)"

One of the blessings of the trip was meeting the Walker family. If you remember a few weeks back showing you a picture of Karen Hartman who is the teacher for this couple who have nine kids. Anyway, we stayed at their house and it was great for both Kamryn and me! I got to meet Bob and Candance and hear about their ministry to street boys and their construction of the Nehemiah House. Kamryn loved playing with their kids and was bummed to come home this morning. One of the Walker girls said yesterday, "I only just met you and I am already used to you." All's well and it ended well and for that I am very thankful. I can't say thanks enough for your prayers. I am convinced that the prayers healed her quickly I am convinced. It was just too quick and too thorough. I know that all kids aren't healed this way, and I believe God is sovereign either way. But, I won't be shy to give Him the glory that is due in this case. Praise God!!!

The last thing that this whole ordeal brought out was the oprression of healthcare in Africa. It wasn't that their wasn't health care available but just how unjust it all is. We have money so we can go to the doctor. Others do not and they suffer. This isn't just an Africa problem, but it is so magnified here and it is overwhelming and heavy to bear under. Our guard Mwape is suffering with Malaria and is still out. We gave him some medicine, but only after things were bad. I had a good conversation with Candance Walker about this and I think all missionaries go through this sense of "How do I fix all the hurt in the world? and "How come I can go to the doctor when I want for what I want and others can?"

Thanks for walking with us.
Posted by Steve at 2:46 AM

OH I'm so glad all is well! Good job, tough little Kamryn! Nothing hurts worse than watching the kids go through health things!

Wow I am glad that everything is okay with Kamryn! Sounds like a harry end to an eventful 2007! I am not sure our health care is so much better, I thought about taking Daniel to the Dr today and decided, no, it costs too much and I think he is probably okay... so you know that when you are a doctor and still can't afford health insurance for your family we aren't headed in a good direction!
Happy New Year~
Molly

I am eagerly waiting to see a new post on your own blog site about your experience from your own viewpoint. Do you think you learned anything? Did God help you through some fears? I would love to learn from you and I keep checking your blog to see if you will share a new post! We are so glad you are feeling better!