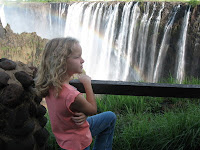 I wanted to do a blog to update those of you on how Kamryn is doing. (I don't know how to do the bulk email thingy and Steve isn't here to do it for me...so a blog it is.) For those of you who aren't on our prayer list you probably have no idea what I'm talking about. I'll fill you in. Yesterday evening, Kamryn was playing in a tall skinny cardboard box which fit right around her body. She somehow got knocked off balance ( I heard someone pushed her, but I didn't see it) and the next thing I knew she was crying. I couldn't figure out why she was crying and she couldn't tell me and at first I just walked away thinking it wasn't anything serious since she wouldn't tell me what had happened. Then, a minute later I came back in and tried to find out again what had happened and then I realized that she was very confused, she couldn't see me, she was very disoriented. We rushed over to a hospital. Steve and I were both very shook up with the fear of her losing her sight. When we got there she was still very upset, disoriented, couldn't see, etc. It was then that the huge shiner on the side of her forehead was starting to appear. They got an IV in (with 4 of us pinning her down since she was so afraid and confused) and gave her a steroid of some sort. They took some x-rays. They then wanted to keep her overnight. As the hours went on she started to calm down, she could see us again, but asked us many, many, times where she was, what was in her hand (IV), what happened. She was so frustrated that she couldn't remember what I was saying and she kept saying, "I just want my mind back." They had a neurosurgeon come and look at her in around 9 pm last night. He did an exam and said that she appeared to be okay but when he heard that she had had head surgery as a baby he said that she needed to have a CT scan. It was an unwritten rule that anyone who has had prior surgery and then sustained a head injury of some sort needed to have a scan. The only problem was that Lusaka's CT machine has been broken for quite some time. The closest machine is in another city about 5-6 hours by car away. He wanted us to make arrangements to get her there the next day. I spent the rest of the night trying to do that. In the end, it's a really long story, we decided that Steve would just drive her today. So, as I write this they are having the scan done. They will stay overnight with some friends of a friend, and head back tomorrow. Kamryn seems to be doing fine, she's irritated that she had to leave the IV in her hand, just in case. She really just wants to be home. But, we are praying the scan shows no blood clots or damage to vision. I'll keep you posted.
One cute side note, last night as she was trying to fall asleep she asked if I could read her a Bible story. I asked which one she wanted and she said, "I don't care, just pick one about someone who had to face their fears." I thought that was so sweet!!
I just want to publicly thank God for all of the ways in which he protected, provided, guided, and sustained us through these last 24 hours. I could list all the ways, but I'm not feeling so good and think I should head to bed. I'll keep you posted on the scan.
Thanks for your prayers, they were heard and answered! Praise the Lord!!
Posted by Steve at 9:35 AM

I understand exactly how you are feeling, Steph. It doesn't matter if our children are 18 months, 11 years, or 26--they are still our children. Nothing gets to us moms more than our children suffering. I often think of Mary. Because of the over-emphasis of Catholicism we tend to downplay her, but there was a woman who knew incredible pain. The Father must have done some careful selecting when picking her out to be the mother of His Son.

We are praying for Kamryn. God is faithful. He will take care of you and your children and grow you all through this experience.

With much love and understanding,
Jenifer

Thanks for the update, Steph.

We will keep praying for Kamryn.

Thanks for the update...we were waiting to hear. We continue to be "worried" with you guys, and are praying for Kamryn and both of you. Hang in there...

jenifer,
Thanks for your comments! Ironically (or not) it was the story of Mary that I read to her that night. I think it was on my mind because I'm reading a book by Francine Rivers right now called "Unafraid." It is about Mary.