We arrived at Victoria Falls/Livingstone... 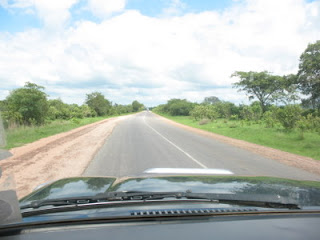 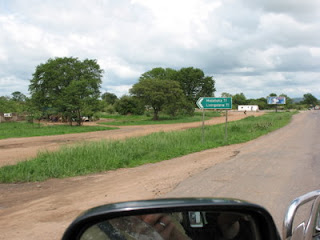 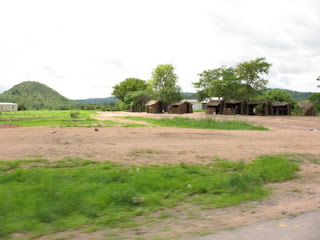 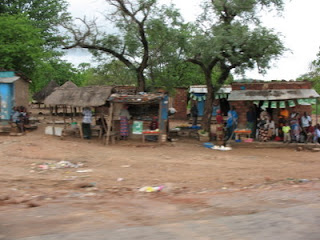 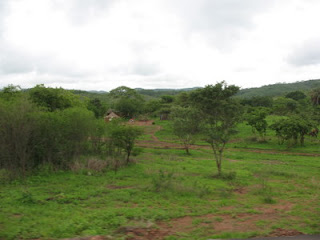 They (or someone) says that life is not in the destination but in the journey. Well, if that it is the case, we made sure that the journey was extra long. In short, we crammed a 6-7 hour trip into 9 and a 1/2 because of a missed right turn. We were warned not to miss a right turn after the second police post, but we missed it. After driving 1.15 hours past the turn through winding hills and beautiful scenery right up to the Zimbabwe border. After looking at the map, we realized we missed that turn. Aughh.... Well, on the way back we saw the sign for the people coming back from the direction we just came from 2.5 hours in the wrong direction, but there was NO sign coming our way. Anyways, we stopped at the famous Tooters rest stop and our good friends the Whitfields stopped on the way back from the Victoria Falls. Luke was a bit miffed because he just got a ticket for not having reflector stickers on his front bumper. It cost him a cool 54,000 Kwacha which is about $12 dollars. We laughed, er, I laughed at how he could get stopped for something so small, especially in light of the looks of many of the cars that would go through the police stop. Well, my laughing didn't last long, because at the same police stop, I got a ticket for having a front obscured licence plate. Yeah, the black on the letters was a little rubbed off. How much was the ticket? Yep, 54,000 Kwacha and now I was miffed... First, because that was such a dumb thing to get a ticket for, and second because the lady writing the ticket tooookkkk fffoooooorrrreeeevvvveerrrr. She kept asking me random questions like my name, (which was on my Zambian Licence) and my age (which was on my licence) and my address (which was on my licence). And then, as I am waiting, Mike Hawbaker shows up. He is with another mission but is in Lusaka quite a bit. I see him smiling and shaking hands with this police officer. I walk over and say to the police officer, "You know this guy!" as I am shaking hands with Mike. I told Mike that I got a ticket for an obscured license plate. The police officer was a bit taken aback that I knew Mike and said to me, that he told me last time that my car has obscured licence plate and I didn't fix it. But, I told him I had never down here before and Mike attested for me. So, I then asked what the police officer's name was, shake his hand, and said, "See, I am a good guy. The next time I come through here on the 26th you won't give me a ticket for anything, right?" He smiled and away I went... I think I would have gotten free from it if Mike had come earlier. But, to no avail, I paid my ticket and away I went... We made it to Livingstone without any car problems for which I am so thankful. I had driven past 100 kilometers/hour only one time since I have been here because Lusaka is basically a stoplight city.

We made it to our lodge, Chanter's Lodge, in Livingstone, took a drive around and saw our hotel that we will stay on Christmas Eve and Day. It was a bit nicer, and we saw a hippo from the dock in the river. That was cool. There was a sign that said, "Don't feed the monkeys!" Tommorow, we will head to see the Falls, so check back tomorrow for an update!!!
Posted by Steve at 9:54 AM