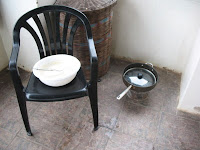 Well, I had promised the girls pancakes for dinner. And, on cue, the power went out at about 5:00PM. Well, I thought I would improvise and busted out the guards charcoal brazier. I was getting a little nervous though because it didn't seem to be getting too hot. With 3 hungry Allen girls and two hungry little Whitfield girls, I began to panic. I prayed. And, he answered... The power came on and I was saved. We enjoyed pancakes and eggs for dinner, five little girls and me! (Steph and a bunch of people went out for a gluten-unfree dinner!)

Today I spent time with Frances going to the orphanage to see the problems that existed. I was blown away. Light bulbs, sink handles, showers, and on and on went the list. I would have never known there were problems except last week when I was there the toilet wouldn't flush and the sink didn't work. Anyway, I took Frances down town and we bought a load of parts, screws and other hardware stuff. On the way, we had a good talk about J.W. stuff, Jesus and life. Hopefully, it will be all fixed by Monday.

Wisdom seems to be doing better and better. Phil and Lisa took him back to his house today. Please pray for him during this next few days. There is so much chance for infection.

Tomorrow, Zambia plays Cameroon in the Africa Cup in football... Luke and I are going to watch the game somewhere. This is a big deal over here. Read this article to see what happens when you take the biggest deal of the year and decide to put it on cable instead of on public TV and throw in a power outage with it! (Just so you know, that Chaisa/Mandev area is somewhere I have preached and done conferences!)
Posted by Steve at 11:48 AM