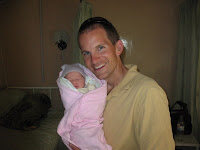 Luke and Elise Whitfield, good friends here on the Action Zambia team, had their baby this week. This was Elise's fourth pregnancy, and her fourth C-section. They had a good doctor, a close and good hospital, and all was good. Well, all except the power. The power has been in and out for a month. (Today it was off from 6 am to 11:55 am and then from 5 pm to 8:30pm...) So, it was a bit of a concern that the power would not be on for the c-section. But the doctor said it would work o.k. to have the c-section without power, but obviously it was preferable to have power:) Well, I so appreciate the faith of both Luke and Elise, and God rewarded them big time! They went into the surgery, like down the hallway about to go in to the room, with no power. When they walked into the room, the power came on. The surgery went really well, a little 5 lb 9 oz baby came out perfectly (with the cord around her neck, but fine other than that). After stiching up Elise, they carried her out of the operating room, and once she left the operating room, as she passed out the door, the power went off. Amazing. Baby, Mom, Dad and family are doing well. The missionaries around town are pitching in meals and stuff. Just wanted to give praise where praise is due! I included a picture of me with baby ____ (they haven't named her yet!) On another pregnancy note, Stephanie is almost out of her first trimester. She feeling much better, except at night. She made her first meal tonight in a month and half. There was much rejoicing by everyone. I am not sure who was happier, Daddy or the kids:) Thanks for your prayers!
Posted by Steve at 11:40 AM