Conference - No power but powerful... 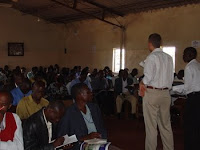 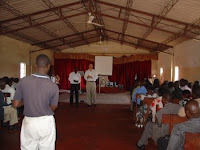 I am so encouraged by today's conference. I did a expository conference in Kanyama compound. There were somewhere between 150-200 people there. Many of them had been at the conference that I did in December in Kanyama about inductive study, so that was encouraging to see many of them come back. I made a great powerpoint presentation that would have wowed everyone had there been power. But, the electricity was off all morning, and my powerpoint went for naught. Well, not totally for naught. It was helpful to put it all together and continue to refine the the approach to make expository preaching attainable for all pastors.

Anyway, it was powerful, but not because what I did. I brought three of the pastors from my Garden Pastors class. And, that made it all worth it. Peter Zulu was my translator, but I might as well have not been there. He took my word and made it twenty and had the crowd laughing and yelling and it was priceless. After 5 months of weekly studies, these pastors know the material so well that they can teach it and they loved it as well. I had a pastor get up and share a testimony of how expository preaching had helped him. And another shared an analogy of the process of inductive study and expository preaching. Overall, it was just so satisfying to see my students (all of them significantly older than me) now understanding and valuing this way of studying the Bible so well that they can teach it and do it with genuine enthusiasm. I was hoping to have pictures yesterday to show you the process that I am refining and teaching, but the internet is not agreeing with me last night or even now. I don't think I will even get one picture up tonight
( I got two up:)

At the end of the time we gave out Bibles that our good friends had donated and shipped to us. Unfortunately there were more people than Bibles and it was a bit of a mob environment afterwards. These were NKJV Bibles that were I think a few dollars a piece, and I just don't think I fully appreciate or understand how desperate people are for Bible and how hard they are too get. It really is beyond my comprehension and you would have to be there to see it with your own eyes. We had some money donated awhile back for Bibles and we look forward to giving those away at another conference in Chaisa in April.

Overall, it was a great conference. On the way home, Peter Zulu said he had a vision of starting a Bible College in Garden that would teach Inductive Bible Study and Expository Preaching. I just smiled. What a blessing to be part of this. Thank you for your prayers.
Posted by Steve at 12:05 PM