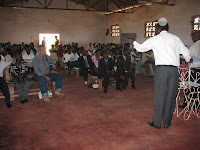 I was asked to speak at conference for five churches today. As it turned out it was for 10 churches, but it was for the leaders, deacons, elders and pastors. And, I prepared one message, but they wanted me to give two. And they wanted something on giving. This morning as I was washing the dishes, I sensed a premonition from the Lord, a word, something that I should speak on servanthood. I had already prepared my lesson and I had nothing on servanthood and it was to a mixed group, not leaders.

Well, I was prepared only in that when I found out they wanted me to speak to messages, I at least knew what I was to talk about. The first message was on anxiety. They second was on servanthood... The first was leading in Christ and the second was leading like Christ. The morning went well despite the audibles called for me. After I gave the second talk on servanthood, and I had some questions and answers, one man said, "Thank you for your talk. I believe this didn't come from your mind or your heart, but from God!" I was blown away, but it was encouraging to me, because this idea that God would give me the words actually came true. Now I believe in preparation and study and hard work, but it is cool in these situations to see God come through.

The funniest memory of the day when I was talking about learning to be a servant. I told them about how God has led me to speak on servanthood while I was washing the dishes. In Zambian culture, washing dishes is woman's work. Never would a traditional man wash dishes. So, I said, "Washing dishes is good humbling. I think more men should wash dishes." I have never seen so many women whooping it up and hollering. The guys, well, about half of them clapped. It was priceless. I wish you could have been there. Thanks for your prayers!
Posted by Steve at 12:58 PM