A good Saturday, too 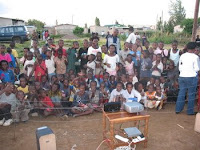 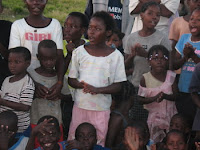 If you read yesterday's post, you saw that we had an outdoor theatre in the middle of the compound in Kanyama. It was as surreal as you can imagine. Tonight went even better but it was a bit more of struggle. The biggest problem happened when I forgot the remote control for my DVD player. I couldn't get the subtitles up 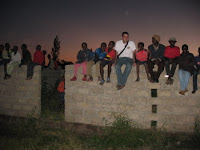 and so the movie played in the Aramaic language that it was originally in, but without any explanation of what was being said. So, I asked the Pastor to find another DVD that we could play. Eventually another one appeared, but the remote control had no batteries. 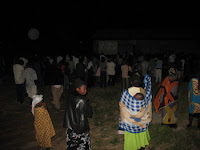 So, we couldn't access the menu of the movie to put subtitles on for either DVD. So, we prayed, and then on the new DVD player, all of a sudden the words appeared on the screen. But, not only words, but narration, maybe for someone who is blind. So, there was not only narration, but English words being spoken over the Aramaic and subtitles. Something for everyone:) I am not sure how that happened. It was pretty funny though that at times a woman would speak for a man's part and vice versa. Needless to say, it made a huge difference. People started engaging and watching and absorbing. One pastor was telling me about two young guys standing near us. One guy was interpreting what the subtitles said to another guy, and they were so engaged in the story of Christ, that they were actually in the story as if it was happening live. One guy said about the Jews who were beating him, "They don't know who He really is." It was interesting having that translated. They gave an invitation for anyone who wanted to know more about Jesus, and about 20 adults came forward to a room to talk about spiritual things.

As far as numbers go, there were a whole bunch more of people there tonight. I don't want to exaggerate and I had no way of actually counting the numbers, but I would say, maybe 10,000 to 20,000. Well, maybe more like 300-400:) They had kids and adults and everyone in between. Brent came down with me to help out. It was great having him along. I am convinced after this weekend of the value of showing these kinds of movies and I look forward to doing some more things like this.
Posted by Steve at 1:27 PM