Something happened on the way to church.

Today was Palm Sunday. I was driving through Garden going to Kanyama to preach this morning when we ran into a nasty traffic jam. I was already running a bit late, so I was kind of getting frustrated. Until I could see at the very top of the hill a bunch of people in the road. There was a group of people walking in the streets waving palm branches... As I watched them walk by us, I noticed our very own John Daka (in the suit jacket) walking with the church. Cool timing to see him, but even more impressive because he worked the guard shift the night before, getting home, changing and then walking with his church... Pretty cool...

We saw another group walking and we got another picture.... 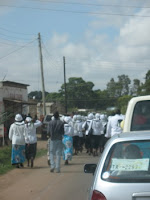 Well, after that we drove without any major problems to Kanyama, the orphanage. To set the stage, I (Steve) need to say that I had to go to bathroom really bad. To make matters worse, we drove probably a good two miles on bumpy, bumpy roads. Then I get to the turn off and I can't remember if it was the first or second left. I chose the first (it was the second). But, it is o.k. I know where we are and we will get there just fine. We go through a few mud puddles and then we come to a big puddle. Stephanie says, "I would put on 4x4 and lock the wheels." She says it again. Kamryn says, "I wouldn't do it daddy!" And I had this flashback, to the time when I was trying to get out of the compound and I was going to turn down an alley and she said, "I wouldn't do it" and I did and I ended up deep inside a huge mud hole. Well, my hesitation lasted for a moment. I decided to drive on the side where it looked dry. Needless to say, big mistake. We drove, we slushed and we stalled and then we stopped. We were stuck. 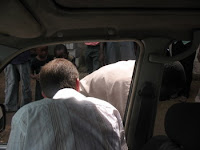 Well, I didn't know what to do, but I knew that it was going to take awhile to get out and I knew that I had to go to bathroom, so I left my wife and kids stuck in a ditch and took care of my issues. When I got back the car was now surrounded by a bunch of curious little kids, checking out the blondies in the back seat!


Well, I am not sure how to fully illustrate what went on for the next hour. 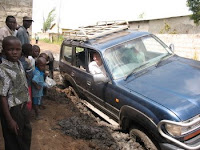 We had about 8 guys trying to push, and then dig and then put rocks down all the while talking in Nyanga about how to get this poor Mzungu out of this ditch.

It was hot and I was a bit stressed. I tried to be thankful in all situations. 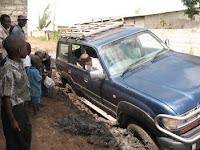 Well, Bruce, the pastor from the church I was preaching at called and then walked over to help us. He was kind of the supervisor on site in his nice suit. Though we managed some progress getting out of the original ditch, we actually got stuck even worse. It just wasn't working with the guys and the situation appeared hopeless. Until, one Zambian said, "Does this winch on the front work?" Oh yeah, the winch! So I trodded through the mud on the back and got the winch out, and then hooked it up. The electronic winch did not work. I tried again and again. Eventually, it worked... I got it locked up and we pulled it out and tied it around a conviently located electric pole. So with the guys pushing and the winch pulling the car, guess what happened next? The electric pole came crashing down on top of the car. Well, actually, no it didn't, but I was afraid it would and I am glad it didn't. Actually, this worked. I didn't think I would ever get out, but I did... In fact I got all the way to the pole, and then I was stuck because the pole was in my way. I asked if they could move the pole, but they didn't do it. I thought that was a bit rude:) Well, the last problem was that I didn't have any kwacha to thank these guys. So, I asked Bruce to tell them in Nyanga that I would be back on Friday to give them money and to invite these guys to see The Passion of the Christ movie that we are showing for our outreach on Friday. So, it ended up cool. He was able to invite a bunch of guys to this gospel outreach, who obviously were not in church because they were busy helping a crazy mzungu out of the ditch. 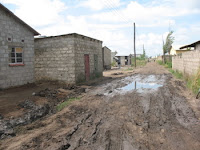 So, after we were out, we took a picture of the ditch for memory sake. 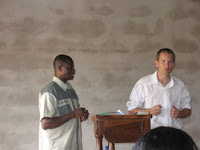 The morning preaching went well. They sang our favorite Nyanga song and I preached again on Philippians 4.6-7. It was a fun group to preach to because this was my third time and their were some familiar faces. 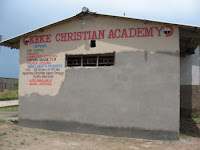 Afterwards we took a tour of their new school they are opening on May 10! I am really proud of what they are doing! Any teacher looking for a job? I took a picture of the prices of education to give you some perspective. 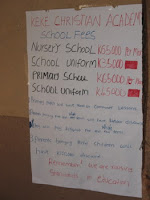 Anyway, it was quite the day and we got home exhausted, but thankful. All that to say I thought I would share a bit of my failures, because I have learned to take humbling opportunities as a gift!!!
Posted by Steve at 9:43 AM

You know, in high school, we didn't consider it a successfull outing unless someone's truck ended up stuck in the mud, on it's side, or wedged between two trees. All a matter of perspective.