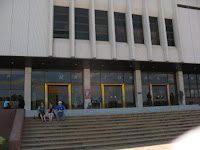 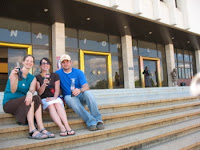 We took a good 'ole field trip yesterday to the Lusaka Museum as part of our orientation yesterday. It was the reverse of the statement, "Don't judge a book by its cover!" The outside of the building was really nice but inside was a little dated. But it was interesting to read about the history of Zambia, the fight for independence and to see the Zambian artifacts. The other day one of our team members wrote a monthly update letter and we thought they did such a great job, we asked if we could plagiarize and personalize their letter as we are going through many of the same things as well... So here goes:

We have also barely scratched the surface in learning Nyanja. We’ve covered five lessons and although we’re making headway, we have a long way to go.

Knowing the culture is another speed bump that slows us down. The newbies on the team meet twice a week for an orientation in Zambian life. Led by , we’ve covered topics such as animism, family roles and relationships, money matters in , and expectations of missionaries. These sessions have given us insight into crucial topics as well as knitted our hearts together with fellow team members.

also are learning lessons on how to make do with just a little. Zambians are very ingenious at figuring out how to accomplish a task without the resources available to Westerners. For instance, a fellow down the road had some mechanical abilities and wanted to open a shop but had no property or building. So he dug a pit on the roadside and lined it with brick. Voila, he was open for business. Customers pull off the road and over the pit to get their oil changed, etc. Any land that is not being used is pretty much open to squatters’ rights. Gardens are planted alongside many roadways and up against the walls of estates. Sometimes you will even see squatters’ huts built on land that obviously belongs to someone with money. Since the land isn’t being used or doesn’t have a wall around it, possession becomes 9/10’s of the law.

We’re also learning that family is very important to Zambians. Family relationships and responsibilities follow a pretty strict code. Your father’s brother’s children are not your cousins. They are your brothers. And your father’s brothers are your fathers. Usually Zambian children are likely to be closer to their uncle-father than they are to their biological father. Fathers tend to rule the home with a strict hand and little affection is shown to the children. Mothers are very affectionate and close to their children. Your mother’s sister’s and brother’s children are your cousins. It is okay to take advantage of a cousin but never a brother. If you have any resources—for instance, kwacha—and one of your brothers comes to you for help, you are obligated to give him what you have even if you were putting that aside for your children or immediate family. The need of a brother is always more important than plans for the future. It’s a system that meets crisis needs but doesn’t encourage much planning or saving for the future. Of course, most of the time Zambians don’t have very much kwacha anyway.

One of the hard things to figure out here is who to help and who not to help. Everyone is looking for assistance.

Pray that the Lord will continue to sustain and keep us in His love and care. Just living life is really hard here. What will take you an hour in the states usually takes ½ a day. You can only plan on doing two or at the most three things per day. If you try to do more you end up really frustrated. Even still it wears you out.