A couple of afternoons ago, as I was laying on my bed, allowing my ailing toe to rest, my two youngest came breathlessly running into my room. "There is a cobra in our house!"

As I deciphered their words, I looked at their panic expression. Their words caught up with my mind, and I began to panic. The only words that came to me at that moment as I lay helpless in my bed were, "Shut up! There is not a cobra in our house!"

Bradyn was like, "No not in our house but in our yard."

"Really," I said as my my eyes widened.

"Yeah, a big one," Julia said, showing me with her hands, "about this big!"

Bradyn said, "No it was like this big!" as her hands expanded greatly.

"Wow." I said, now believing them, as Mom seeing it is a credible source.

And sure enough, the story was true. A big cobra (about thhhiiiisssssssss big) was in our yard. As our guard tried to kill it, it jumped up the wall and went through a hole into the next yard.

Well, that was a bit wild, especially since it was found right near the guard's house.

So, yesterday, I am in the house getting ready to go our for our 10th anniversary date night, and I hear Miriam say to the kids, "We saw another snake!" I hobbled after them and sure enough, another snake, another cobra, but a baby cobra. A baby of the mommy we saw yesterday!

I can hear you say now, "Yeah, right! A cobra." Well, take a look, my skeptical friend, and tell me 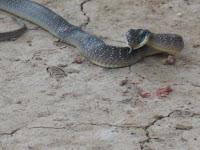 this isn't some sort of cobra... It was a baby, yet, but as the guard put the hoe up to it, it struck just like a cobra would do. It couldn't move because it had been hacked by the guard. He could still strike with his mouth though... Really crazy.

And then, a few minutes later, we heard a thump and a bird flew into our living room window. He died. And then Zorro picked him up and carried him away.

All this as we were getting ready to leave for our date. I have found the new advertising slogan for Africa: It's a wild life!
Posted by Steve at 12:34 PM

Good gracious, you guys! You need a mongoose or something! (Did you ever read "Rikki Tikki Tavi"?)

The boys and I will be praying again for your safety,

I don't know how your family does it? I cannot stand snakes and insects. You and your family are such an inspiration. Love you all.

I don't know how your family does it? I cannot stand snakes and insects. You and your family are such an inspiration. Love you all.

lol, steve, your a great writer and that is a fantastic story. =)