Gratitude is a goat

Last Sunday, I was supposed to preach in a village... Stephanie was up all night with a bad stomachache, and I so I called my teammate, Brent Roberts to fill in for me. Here are the rest of the incredible details... Check it out!

For those of you who have been waiting for the best of the best of blog posts, this is it! This past Sunday, Steve Allen, who is another missionary on our team called me with a request. His wife Stephanie had been up all night sick and needed rest. He was scheduled to preach that morning, but thought it would be better to stay at home with her and the children. So, whom did he think of as a last minute stand-in? You guessed it, little ole me. I don’t know if it was the lack of sleep, or maybe someone had slipped something into his coffee when he wasn’t looking, but he requested that I fill in for him.

For those of you who don’t remember my blog post about 2 weeks ago, let me refresh your memory. I’ve only preached one sermon and that was 2 weeks ago. This of course was the first excuse I threw Steve's way, but he calmly reminded me that this was a different church. So, it was probably ok to use the same sermon. Then I threw out another excuse of not having a car to drive, which he countered with letting me drive his cruiser. As he told me later, God had a plan for my life and he (Steve) was telling me what it was… So, hesitantly, I accepted and oh what a blessing it was. 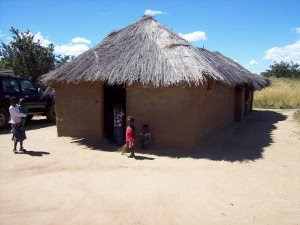 On the way there, I stopped to pick up Mark Mwale, a pastor of a church here in Lusaka. He had arranged for Steve to preach at the village and was responsible for making sure I showed up at the right place. After picking he, his son and wife up, we headed north towards a village on the outskirts of Lusaka. After driving for about 20 minutes, we turned off of the highway onto an unkempt dirt road and then preceded about 1/2 a mile out into the “Bush.”

The church was a small mud brick structure with a thatch roof. One of the elders was waiting outside to greet us and welcomed us as we drove in. When we got out of the car, we were immediately ushered into the church. Inside, were pews, which were also made out of the same mud brick that was used to construct the church. About every 10 feet, there were wooden planks stretching from dirt floor to thatch roof ceiling. Up at the front of the church, there was a stage, which acted as a pulpit. This is where we sat before & during the service. 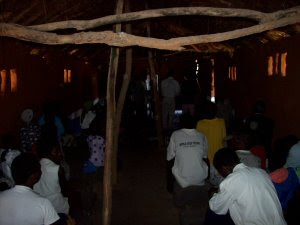 As we waited for the service to begin, I just didn't think that many people would show up. I envisioned preaching to an audience of about five. As the time neared 10:30, though, I was proven wrong. Villagers began flowing into this small church building, so much that by the time the service started, there were a little over 70 in attendance.

The service started with praise and worship, which truly was a blessing to me. Those in attendance worshiped in their native tongues, Bemba and Nyanja. And they worshipped with fervor. They sang, danced, and shouted their praises to God. As I sat there, I couldn’t help but think of how the Bible depicts the scene in Revelations when God will be worshipped by every tribe, language, people & nation. 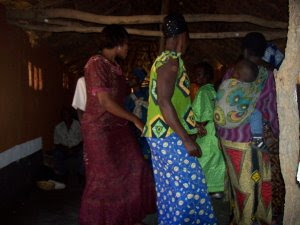 After worship, the pastor introduced me to the congregation and invited me up to preach. The sermon that I preached was no different from the first sermon I preached two weeks prior, but the results were... I preached on 1 John 1:5-7 and shared about how God desires for us to walk in the light. I shared how God desires that we live holy and upright lives, but that even when we make mistakes, we should seek to allow God’s light to expose our sins instead of us trying to cover them up.

At the end of the sermon, we had a time of prayer. I challenged them to ask the Lord to examine their hearts and reveal to them areas where they had fallen short in their relationship with the Him. As I sat there praying for myself, the Spirit began to move to the extent that one of the ladies in attendance just began to wail. As she cried out to God, others also began to audibly pray. It was truly a blessing to see the Lord at work, even through the message given by a sinner like me.

After the time of prayer, I finished the rest of the sermon and then we celebrated the renewing power of the Cross through more worship. It was truly an experience I will never forget.

It gets even better. After the last worship songs were sung, the worship leader had me come up front along with Pastor Mwale. He presented us with gifts that were brought to the church by the villagers in attendance. As we stood up front, person after person came in through the side door of the church bringing food from his or her own harvest. They brought a plethora of assorted fruits and vegetables (African squash, Chinese cabbage, potatoes and bananas). The shocker was in the last gift brought in, a GOAT! Yeap, a real live goat! In all my life, I never thought I would be given a goat as a gift for sharing God’s word. 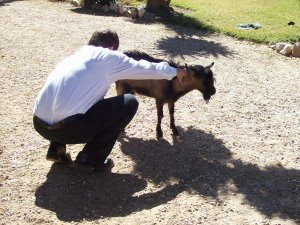 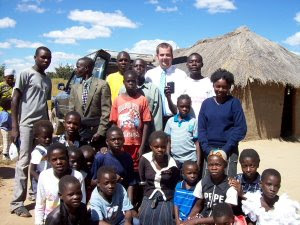 As we prepared to leave, I couldn’t help but be overwhelmed by the generosity of these villagers. These men and women, who struggle for daily existence, went out of their way to welcome me and provide me with gifts, which to them were a great sacrifice. And they did it with Joy! It was so humbling being in fellowship with them this day and truly blessed my soul to the core!
Posted by Steve at 11:34 PM