It has been a while since we wrote, I think a new record. I guess it shows the state we are in trying to get ready to come home. We are packing up and finishing commitments and it just is busy. Two weeks from now we will be on a plane home. Coming home is such a surreal thought that I can't even really put it into words. So, I won't even try.

As for life here in Lusaka, where it has been 75-85 degrees EVERYDAY (and not just one day in Seattle where everyone freaks out:), and we are enjoying our outdoors... We realized that we will have the everlasting summer, going from summer in Bellingham to the September hot season in Africa back home in the summer in June... Not quite what we planned on, but we'll take it. 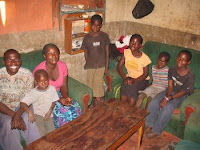 Some cool happenings as of late... Got an email from a friend who said that they felt led of the Lord to give some money to a pastor or something... Well, it just so happens that I was praying for that very thing, because Pastor Sakala who has planted a church has been really struggling financially and wants to have a job with flexibility so that he could continue pastoring. Well, the money that was given toward this pastor and his five children will enable him to start a hardware business. He was so grateful. I went in to his house to take a picture of his family. He and his five kids sleep in a two roomed house, probably 16x12, all cement. Like I have said once, I'll say it again, "It takes so little to help sooooooo much!" I am hoping to take a picture of his new shop sometime soon...


Many of you know that I have been heading up the AZ Pastor Resource Library. As of now, I have inputted over 800 books into this handy dandy library software program (it has this cool ISBN download feature which goes onto Amazon and grabs a picture and all the specs) and will get some help with the 200 or so more. We have split this these books 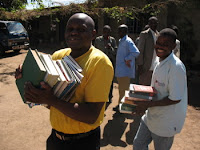 into five areas around the city. We hope to add in years to 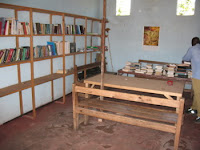 come a computer center for Logos Bible Software and a Moody Theological Distance Software which can help people complete a degree online, lots of tapes and MP3's of sermons and more books! The pictures come from Lusaka Theological College where I taught today!!! 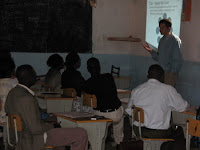 I taught the fourth of five four hour classes today. But what was really cool was that two of my students from Garden taught the last part of it and they far exceeded 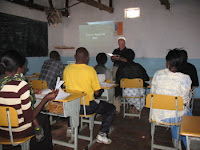 my effectiveness which is part of the strategy, training up Zambians to reach Zambians, to in essence work ourselves out of job! Tracy Singleton, the newest AZ missionary, also came and taught a part of the beginning. 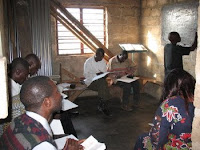 One last thing, I had our last Pastors meeting in Garden on Thursday. I basically told them I wanted them to do the entire inductive study process as a group, as a test of sorts. I came for about 20 minutes and it was thrilling seeming them work and argue and figure out what was the right answer...


So, that is about it for now. I preach tomorrow at a church in Kanyama. We sell our car tomorrow. I teach the leaders of the AZ team how to upkeep the website. We will be having the Garden group over to our house for pizza and pop on Tuesday. We will be giving them some study bibles which had been donated by some friends of mine.

Thanks for your prayers for our family!!!
Posted by Steve at 7:34 AM

Hello, I have been following your blog for quite a while now. I was in Zambia last summer to adopt a little girl. I stay in contact with Rev. Aaron Zimba that lives in the compounds and helps children and widows. He has said a lot of the families are really having a hard time getting food right now. I have been sending small amounts of money but it's not enough to help them all. I told him I would try to contact some agencies that might be able to sponsor them. If you have any ideas please help. I can give you his contact info. if you think you can help any of them. My e-mail address is deanne.broscious@midwives.org
I hope to be returning to Zambia this summer to complete my adoption. We live in Northern WV. I am married with three boys. Your girls are beautiful.

I also have a site with our pictures when we were in Zambia.
The site is www.broscious.shutterfly.com
and the password is 4everfamily

Thanks, and God Bless

Thats awesome Steve, steph. I didn't know yall had a blog. I will read everyone of them. Your once man in my life that is an encouragement to me because he didn't compromise the passion God gave him for his life, but pursued wholeheartedly. Love ya-