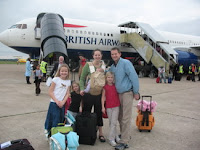 It was this time last month that we arrived in Zambia. We hit the ground running and we haven't slowed down much. I started teaching the week I arrived and have been teaching three times a week since then to the 16 pastors who are involved in Action Bible Institute. It has been a humbling, thrilling experience interacting with and learning from these men. It is such a unique experience to be a part of helping train and teach pastors who will have an impact in the most difficult places to pastor and live in the world.

This last week was no exception. I was teaching in Ephesians 3. I was talking about Paul as a prisoner of Christ and in prison for the sake Gentiles. It is challenging and convicting how Paul was uncompromising in his preaching of the gospel to the Gentiles, even if it meant that the Jews would throw him in jail. He could have softened the message and probably been saved from jail. But, he did not. I encouraged these pastors to preach the gospel despite what type of response you get.

Later on in the class, I asked the question, "What are some things that are difficult to preach, things where it would be easier to just skip over?" The hands shot up. The first pastor said, "Money. If you preach about money, they don't like it." The next pastor said, "Righteous 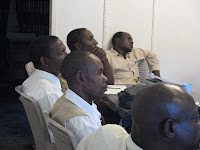 ness!" The next said, "Blessings!" Everyone was a bit surprised by his response, and then after some explaining, we realized that he meant the opposite of blessings, suffering. If you preach suffering for Christ, people will not come, especially in a culture that is saturated with the health, wealth and prosperity gospel. Then one of the pastors said, "In the village, there are things like rituals that directly oppose the Bible, but they are part of the culture. It is difficult to preach the Bible when it is so engrained in the culture." And the other pastor said, "Yes, like polygamy." You can see that some of the issues that they struggle with are like ours, but others are things that we have never really thought about.

Today we talked about humilty and how my prayer is that this group of 16 pastors would be the start of a new generation of pastors in Zambia who approach ministry as servants who humble themselves before their church and serve them with faithfulness and love. 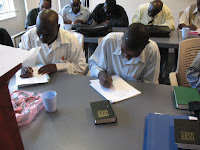 In addition to teaching, we have also begun Leadership Groups, where I meet in small groups with four pastors every week to discuss the book Spiritual Leadership by Oswald Chambers. This past week was amazing as I had them share their testimonies. One pastor, Martin, was the 11th child and his father named him "Ndani" or something like that because it meant, "They ate them." The 10 brothers and sisters before him died before he was even born. His father believed that the other 10 were cursed and killed because of witchcraft and Martin would be the next. Martin broke the odds and now is serving the Lord strong at the young age of 60. (Isn't that crazy that I am "mentoring" a 60 year old? Martin is amazing man, gentle, wise and humble.)

I will also visit these pastors in their churches once a month to sit in and be a part of their services. We really hope to be more than a bible college, but to be pastor's college, to invest in these pastors and their families during the three years that they are involved in the college.

In addition to the teaching and mentoring, we also had a grand opening for our Pastor Resource Center. This week, students started checking out books and dvd's and cd's. It seems like the early winner was John Piper's books and MP3's and a variety of commentaries on the book of Ephesians. We will get the Logos Bible Software going in April during the Break and hopefully get the MP3 sermons up next week.

In addition to ministry at the bible college, we are planning on as a family getting involved at an orphanage weekly. I am also teaching on sunday nights to a youth group for missionary/ex-pat kids. It is "fun" for me to be back with the youth especially for this series talking about dating and relationships.

Stephanie and the Allen ladies are fitting right in. Schoo 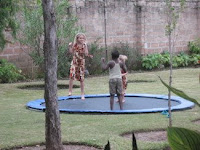 l is up and going and they are starting to get in the flow of things. They have made some friends that are nearby, including three zambians girls who live next door. During that big storm we had, I think the second night we were here, the wall fell down, literally and figuratively. Our kids have become friends with the neighbor girls and they have a blast jumping on the trampoline and playing board games. Stephanie has helped out with the choir at our church, International Baptist Church, and will probably play piano at some point at the Missionary Bible Study on Sunday nights.

It truly is amazing how fast the month has gone by. But, we haven't missed home too much. Our friends from Portland, the Knifong's were here last week and some friends, the Huckaby's from Bellingham are here this week. They are both checking out ACTION Zambia with a (hopeful) intent to join our team as missionaries.

And, speaking of Bellingham, I have this little google reader thing going and I get the weather for both Bellingham and Lusaka... Just to rub it in a little bit, check this out: (I think we win!) 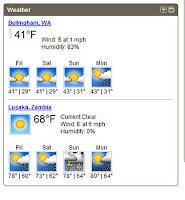 And, then I come to class one day, and one of my students is wearing this shirt: 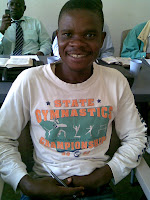 What are the odds of that? A Washington State Gymnastics championship shirt in Africa? He didn't know I was from Washington. He just bought the shirt in the compound. So, I showed him where I was from, and they all thought I was a bit weird, I think, in my enthusiasm over this shirt.

And then I am in Spar, and Jason and I were browsing and I saw this bottle of wine: 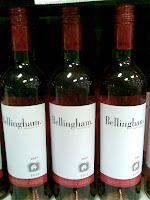 So, needless to say it has not seemed like I am really that far away and yet at other times I feel like I am on a different planet. Thank you for partnering with us in your prayers and in your financial support during these crazy days. We are blessed and grateful to have such a great team supporting us.
Posted by Steve at 12:01 PM