Well, it is pretty easy to get into a routine, even here in Zambia. I do my study. I speak to the pastors and I live in Africa. Normal, you know. But, today was one of those days where Africa decided to shake me up a bit and restore the awe to a place where it should be.

It started out with its beautiful sunny warm skies, the bird were chirping and life was good. (Did I mention that it is warm here?) I did some study for my class and then took off to get some insurance on my new used car, which took an hour. This was a very nice office, professionals, computers and what you would expect from an insurance place. But, then I went to get the license plates.
It is a bit different here where you don't just to go to the DMV, but you have to go to one place to get the registration and then another place to pay the road excise tax and then another place for the road worthy certificate and then another place to buy the license plates. Well, I had the other stuff done, and I just needed the road plates. You have to go down to Lumumba road. It is across from Micmar someone told me. So I drove down there and I had seen guys on the side of road that had license plates. I wasn't exactly sure where they would be though. I asked a guy who had his window down in a car next to me. He said, "Follow me." So I followed right past the Micmar where I should have been and down a road that I knew wasn't Lumumba. 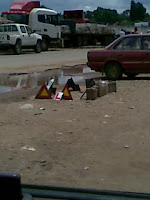 So, I just kept on driving and started over again. So, I found this on the side of the road. Apparently, there are agents who sell licence plates on the side of road. (You can see why in this picture where it may be a bit confusing.) You give them the number you want and then they run across the street to the number place, and it takes just 10 minutes (it took an hour and some.) So, I am sitting in the hot car and watching life, which is just so crazy different, go by. Ladies carrying peanuts and boys carrying muffins and cars and trucks and chaos. And then I was like I need to get out and talk to the licence plate guy. So, I did. And I asked him about where he was from (Mongu-a village) and what grade he finished in school (4th grade... he is 23 years old), his church (it is called Love Foundation Church) and how this whole licence plate thing works (or doesn't work). It was more than a bit humbling and enjoyable to get to know this guy, Elvin. He introduced me to his pastor who he co-runs this licence plate sign company thing. I talked to another guy, Patrick who was just hanging out. He had no job. He wanted a job, but just moved here last year from the north when his father got laid off. And now he just looks for jobs. It is really hard to find work here. He only had a 9th grade education. I asked him if he went to church and he said no. I did my best through broken enligh to share a bit about Jesus. I was thankful for the opportunity because most of my work is with believers. It encouraged me.

I eventually did get my licence plates - ABR 8195, in case you were wondering. Made it home and after a quick lunch, I was off again to my pastor class. The class was great. I got just a little bit passionate and they all had a good laugh at my expense. We were talking a bit about the culture of Zambia and the struggles for leaving behind cultural things when they become Christians. Whether it was typical stuff like alcohol or sex, or different stuff like animism, witchdoctors and ancestral worship, it reinforced that being a Christian is (and should be) a major life change. I busted out Logos again and I had him them oohing and awwing...

On the way home, I stopped and bought some water. On the way out, I spotted a young boy beggar. He actually spotted me probably a long time before... As I entered my car, this skinny boy in a ratty shirt and hole filled shorts with no shoes said, "I'm hungry." I asked him if he went to school. He said he couldn't afford it. A man selling fruit walked up and said, "O.K., pick one." He smiled and said, "No." I said, "You are hungry." He said, "I want bread." I said, "O.K." So I walked in and bought him a loaf of bread for K4000 kwacha (about 90 cents). I told him, "Get in school. Don't beg for the rest of your life." It wasn't maybe as rough as it sounded. He could tell I cared for him. I saw another begger, a bit older, coming my way, so I said bye and moved on. Reflecting on that conversation, it is really hard to know what to do. This kid was probably Kamryn's age, maybe older. It sounds so noble, "Go to school" and yet I have know idea what his life is like. Even though school is cheap relatively, it eliminates most from it ever being a consideration. I know their are worse places in the world where there are more beggars and it is a more desperate situation, but this still rocks my world just a bit. It is so different than in the states and it is hard to accept.

I got home to my young kids who were happy, healthy and ready for dinner. But before dinner, a teammate, Megan, stopped by. She had been down a village down south where we are helping build a bridge. The chieftiness gave her a turkey, 3 pumpkins and some corn as a thank you for the work Action Zambia has been doing (along with the three people who are here visiting from the states). 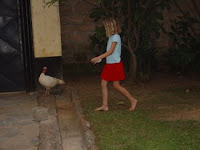 And well, she gave us the turkey. So, right now there is a white wild turkey somewhere in our back yard and I can hear him (or her) gobbling right now.

It is our life. Thanks for sharing the journey.
Posted by Steve at 11:47 AM