Our Workers - Enduring through the Good, the Hard and the Ugly

It has been an up and down week here. I tried to write about it a few days ago, and it has only gotten harder since then. It is interesting having just shared a bit about the fun pizza party with our workers. We talked a bit about being family and how they care for us and they have our back. Well, this week we see how the reverse can be true as well

The Good:
A couple of weeks ago, ZESCO, the local power company, came and put up some new electricity poles on our street and in the process of doing that, they totally sheared a tree on the corner. It wouldn't have been a big deal except that there are a couple of ladies who have a tomato stand on that corner. We have exchanged waves and pleasentries over the past year. I felt so bad for her that she lost all her shade and rain cover in one day. So, I was talking to Daka (the one who is going to construction school in the mornings) and asked if it was possible to give her some shade and coverage back. Well, he went down and analyzed the situation, and came back excited. I gave him a little money, 100,000 kwacha ($20) to buy the wood, cover material and plastic to cover the top of the roof and transport to get the materials here and he went to town, literally. He came back with all the materials and started work the next day. 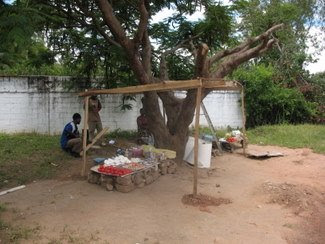 He finished it in a day and to say that the tomato ladies were pumped would be an understatement. But, since it is true that it is more blessed to give than to receive, Daka was flying high when he fi 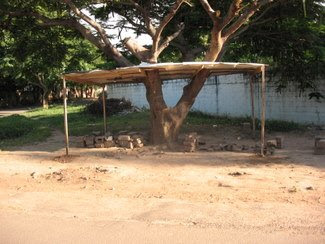 nished and it was really cool to work together to bless someone. 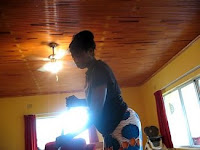 We were on our way to church, and we were running a bit late. But, as we drove down the street, we saw our worker, Mirriam, walking down the road. Apparently, her brother was sick in the hospital. They thought he might have malaria, but after church we went back and found out it was something to do with the liver but it also affected his brain. When he was awake, he was really violent and it took five of them to hold him down. I share that because the whole family had been up all weekend. Not only that, but they had brought him to this hospital because they hoped to figure out what was wrong. But, they had been in the hospital for 3 days and now they were stressing about how they were going to afford it. They were exhausted and heartbroken. We told Mirriam as we were leaving that we were family and that we were going to help them as best as we could. This is following of the heels of Mirriam's daughter being very sick from Malaria and requiring injections for three days straight to keep her healthy. It has been a hard week for their family.

The Ugly
Mwape is our day guard. He is the nicest guy in the world, the hardest worker and an amazing gentlemen. (Again, he deserves his own post which I will do later.) Well, he came to work last Friday, and began to share about what happened the day before. He lives on a plot of land that he rents from a landlord. The property is pretty big, maybe a half an acre (his house is very small and doesn't have electricity). The last three years he has farmed the land for maize, pumkin leaves and other vegetables to help sustain and suplement his family of six. Well, the beginning of the year, he again asked permission to farm the land and the landlord said yes. So, he spent around $100 dollars and spent a month and half tilling and farming the land. I drove by one day and it was beautiful. So a few months ago, the landlord told Mwape that he wanted to clear the land by April, which was no problem, because it would be ready to harvest in April. Well, this past Thursday, March 12, the landlord came in an slashed the entire field of corn, pumpkin leaves and much more (I don't think this picture taken on my phone does the damage justice, but hopefully you get an idea of how big the plot was.) 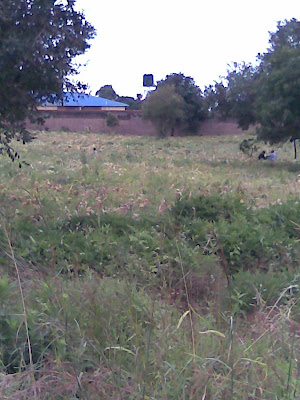 It is hard to convey just how heartbroken he looked and how angry I was after hearing of this ugly, senseless, heartless act by this landlord. 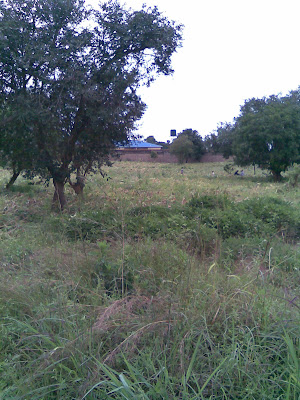 All Mwape, his wife and his family could do was cry watching all this hard work and money go to senseless waste. And then to make matters worse, the landlord told Mwape that he needed to leave the house the next day. Now, often on stories like this, you also want to hear the other side. What did Mwape do to make this happy, and you have to know Mwape to understand that there was no real other side. It was ugly. So, talking with Mwape, I assured him that we would help make up for the loss. We gave him some money to help pay for the first month deposit of his new place, gave him some money for a moving truck and then told him to take Monday off if he needed to. He moved on Sunday. I prayed for him and tried to encourage him as best I could. I shared with him the verse from Romans 12:19 (NIV)
Do not take revenge, my friends, but leave room for God's wrath, for it is written: "It is mine to avenge; I will repay," says the Lord. As a Christian, I tried to help him see God's hand in this and how God can turn bad into good and the verse from Romans should be an encouragement to him. On the way out, he wanted the verse again. So, I went in and printed it out and gave it to him. I thought he wanted it for himself, but, as he was leaving he said he was going to leave it on the door for the landlord. I thought that was pretty good.

So, our hearts are heavy and we would love your prayers for our friends during these difficult times.
Posted by Steve at 11:38 AM

Thank you Steve for sharing so much about your workers because we now know them too! It is so cool to know where the "tomato ladies" sell etc. That is terrible what happened to Mwape. I'm so glad you are there to love them as Jesus would do. He is well pleased.