Checking out my intern's blog!

Just thought you would like to see what my intern is learning these days! You can find his blog here: Enjoy! 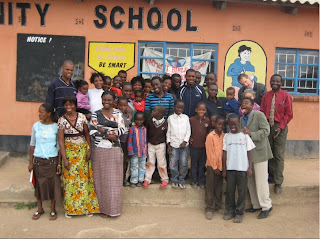 So far it has been interesting to visit the compound churches here in Zambia. I have been privileged to visit five congregations so far, each from a different suburb of Lusaka, ranging from 20 people in attendance to more than 300. Each experience has been different, but I have noticed some interesting common denominators that each church has shared so far.

(2) When the leader of the congregation says, "Let us pray now for..." or "we are going to pray that...", what he/she means is that EVERYONE is going to pray out loud to God at the same time. So everyone audibly speaks their prayer to God together at the same time, the effect of which is a sort of a loud amalgam of voices.

(3) Visitors (or maybe just Muzungu's?) are given seats at the front of the congregation, sometimes with their own small table, and bottled water.

(4) When church is over, the pastor (or "man of God") exits first and stands at the front door of the church. Then the guests/muzungu's exit, shaking the pastor's hand, and form a line behind the pastor so that everyone in the congregation shakes everyone else's hand.

(5) Services are divided up into different chunks, and not everyone comes to everything. The first part is usually intercession -- church leaders meeting before the service to pray for the day, for the people as they make their way to church, and so on. Sometimes there is a Bible study after intersession, which is a time for the pastor or teacher/elder to lead the core of the church in a more personal "teaching" environment. There aren't a lot of kids or families at this if it happens. Then, as the women and children begin to arrive, there is a time of worship (sometimes led by a choir, if there is one), an offering, and a set of announcements (just like in the states) in no particular order. At around 11:30 there is a sermon... or two. The day's offering is usually announced at the end of the service.

(6) At one of the churches I went to there was a separate youth church, but it took place during the teaching time before worship. For the most part, the kids just hang out with the rest of the congregation for all three hours of church. 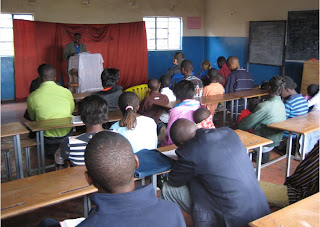 (8) I have not yet had communion with a congregation here. Luke mentioned to me that there is often an afternoon service where the congregation will break bread together, but it is hard to tell if this happens in smaller, more impoverished congregations. If they do take communion, I have yet to determine the frequency -- is it once per month like in my congregation back in the States? Or only if/when they can afford bread and drink for an entire congregation? An issue like this is very interesting to think about in the context of poverty,

(9) There has not been as much "crazy stuff" as I expected, even in the pentecostal churches. No one has been slain in the spirit or anything like that -- the most common thing has been speaking in tongues. Women will occasionally holler during prayer times.

(10) There is no problem at all here with women pastors. It is very interesting to me how this happens everywhere in the world, when God's word is so clear on the issue. Just like in the States, I have seen far more women in the churches than men.