A few weeks ago I joined some friends of ours whose ministry is to the street children in Lusaka. Though it is not our ministry per se, (I call these kind of excursions "just for fun" ministries) I have a huge heart for these broken and abused children, so we asked if we could just join them for the morning. And they obliged! We attended a church service to encourage, hug and love on the least of these in Zambia. I "borrowed" this blog from my teammate Brent because he was there and because it has a picture of Owen and I in it and because he does such a great job summing up all the emotions and feelings of our outing. If you want to see an additional video that he posted on his blog during a night feeding, check out his blog, here! 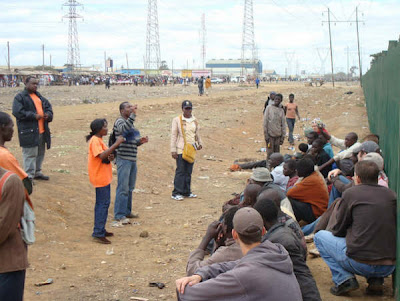 Last Friday, several of us went out with another ministry here in Zambia on a street kids outreach. Our friends, the Moraleses and the Carrs, head up a ministry that reaches out to these vulnerable children. We really didn't know what to expect. We all met at a coffee house in downtown Lusaka and then walked through town to Saweto (a district of shops behind city market). Once we got back in Saweto, we had to make our way through these small alleys between the shops to the back of Saweto. As we arrived, it seemed like the children came from out of nowhere. 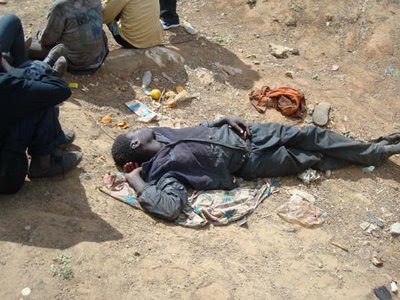 As they came, the leaders of the group we were with, started gathering them towards the back of Saweto along a fence that borders the area. Charles, a once street boy and known criminal in Lusaka, shared with them how Jesus Christ had changed his life. Charles used to be one of the leaders on the streets. He spent a lot of time in prison and was even used by prison guards to "thin out" populations when they got too full. It was amazing to me to see how God had invaded such a hopeless situation and changed what many of us would deem a lost cause.
Most (probably all) of the boys were sniffing Stika the whole time we were there. Stika is a cheap inhalant drug peddled to these children by local drug dealers. The children put a little of the glue in a clear plastic bottle and inhale the fumes. It has a deadening effect on all of their senses. During the winter (which is now), it is the primary way that they endure the cold. So, I don't know how much of what Charles shared was received by these children, but I do know that God's word never returns void!

I think the one thing that God impressed upon me during these outreaches is how little it takes to show God's love to another person. Sometimes, something as simple as taking bread and tea to a boy in a hopeless situation is all He desires from me to show someone else His love!

That sounds like the ministry Kairos used to do at the hospital. We would take coffee and bread to the people waiting outside. Their faces were beyond thankful and we so often did get to explain why we did it: In the name of Jesus Christ. Steve, I am so in awe of your heart and your passion and that of your family and the others you serve with. May God bless and keep you. Love, Terri