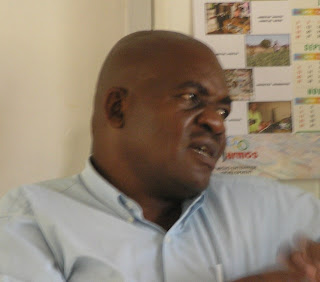 In the local language, Ngoma's first name means, "someone who has died on his own." But Ngoma likes to give it a Biblical meaning from Galatians 2:20, "It is no longer I who live, but Christ who lives in me." (ESV)

Born in Zimbabwe on June 3, 1960, Ngoma lived with his parents and grandparents who had emigrated from Zambia to work in the mines. In 1967 his family returned to Zambia's eastern province and settled in Chipata.

Having been raised in a life of religiosity, the truth of Scripture hadn't come alive for him until he was 22 years of age. His cousin, Charlton, shared with him that baptism was not what saved a person, but that a personal relationship with Jesus Christ did. When his cousin told him this, his eyes were opened, much like Nicodemus. He then realized there was more to Christianity than he had known and that he must be born again.

Following his conversion on March 17, 1982, Ngoma experienced a real freedom and began to grow in grace. Living in the remote bush, there was no one to disciple him. However, God by His Spirit helped him to grow in a number of ways. First, the Lord taught him that he needed to share his faith. Winning seven people to the Lord soon after coming to Christ increased his joy. He also had an intense hunger for the Word of God which led him to read the Scriptures daily. Thirdly, he cried out to God in prayer each day, oftentimes going to the mountains to seek the Lord.

Since his conversion he has lived up to his name by planting churches in rural areas, seeking theological training, and pasturing Faith Tabernacle Church for the past 12 years. He also shepherds a congregation of listeners each Sunday morning through a ZNBC broadcast on Radio One. Although he doesn't see his flock in the broadcasting room, he knows there are many in need of salvation and discipleship who can be reached with radio waves. Ngoma also ministers to HIV/AIDS patients at the George Health Center each Friday where a group of 80 persons meets for Bible study.

Ngoma has not always had a heart for people with this deadly disease. Before his conversion, he thought only prostitutes contracted AIDS. Since that time he has seen that there are innocents who become sick with this illiness. AIDS began to concern him when some of his family and people in the church began to die. Ngoma began to see that when Christ walked the earth he embraced those who were suffering. As he thought about Jesus' example, God changed his heart and he longed to bring the Word of God to patients at the clinic in George township, people who often do not have a church.

As a volunteer Ngoma also coordinates leadership and AIDS awareness conferences. His greatest joy is to see people's lives being transformed. His passion and heart for the work drives him, not the earthly reward, as he uses his own finances for these events.

In his new role with AZM Ngoma is looking forward to working with pastors in the Action Bible Institute (ABI) and discipleship 2:7. He says, ". . . most of our pastors have not had the privilege of going to college. They cannot afford the fees. How can you pastor people if you don't know the Word of God yourself?"

He likens the need for pastoral training to the taking in of physical food. People must be fed with the right kind of nourishment. If they aren't, then they will die. In the same way, pastors must be fed with the correct type of spiritual food. They will die without proper spiritual nutrition. In turn, without the right type of doctrine the people will be misled. "What AZM is doing is helping those who aren't privileged."

What AZM is also doing is planting seeds, according to Ngoma. ABI currently teaches 14 students and 2:7 disciples 10. Those 24 can in turn teach hundreds, then thousands, then millions. In the years to come these very people will impact a lot of lives.

AZM welcomes Pastor Ngoma as he joins its staff and becomes a part of impacting the lives of Zambians. Please pray for him as he serves with AZM. Pray also for his wife of 20 years, Easter, and their three sons, Joshua, Joash, and Joel.