The result of dependency 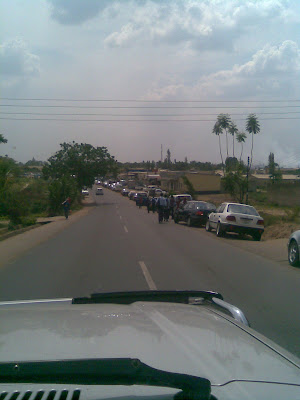 I wasn’t sure what else to title this blog.  Zambia is out of gas, or, petrol, which is what we call unleaded gas in Zambia.  Thankfully, my car takes diesel, so I can only sigh in relief as I drive by these  long, long lines of people waiting to get petrol.  It is kind of unnerving, the dependency on imports for necessities like fuel. I remember last year when we were out of sugar.  You couldn’t find sugar anywhere.  Just thought I would share this with you all to let you in the latest here in Zambia…

Here is the issue:

For the past two weeks, the southern African state, which heavily depends on metal exports for 85% of its total export earnings, has suffered a severe shortage of petroleum products such as Petrol, Diesel and Kerosene.

Heavy industries, including copper and cobalt mines, have reported declines in their output while several motorists countrywide have been forced to spend nights at filling stations, with hopes of acquiring early deliveries of fuel from country’s largest and sole petroleum refinery.

The 33-year-old Indeni Petroleum Refinery located about 250 kilometres from the Zambian capital, Lusaka has been shut down for maintenance and this, industry players say has resulted in the two week fuel blackout in Zambia.

Zambian authorities in Lusaka are optimistic the fuel crisis will ease-up once fresh stocks of crude oil are delivered through-out this week.

Meanwhile, Zambia’s Energy Ministry permanent secretary, Peter Mumba, has brushed aside speculation that the fuel crisis is as a result of the subsequent pull-out of French petroleum giants, Total Outremer from their joint ownership in Indeni Refinery Plant.

The Lusaka government and Total, each own 50% stake in Indeni Petroleum Refinery.

Mumba told Africa News on Tuesday that, the pull-out has been on cards for months and had nothing to do with the current deepening fuel crisis.

Tina Musumali Dagia, who spent a night at a gas station in Lusaka says, “Government should be sincere enough and explain why we do not have fuel. It’s now two weeks....we don’t even know how long this will continue like this”.

Zambia imports its petroleum products from Middle East through ports in Tanzania and Mozambique. It has daily consumption of 700, 000 litres for a landlocked country.

Recently, the Zambian government called for interested bidders to conduct oil explorations in North West, where deposits of petroleum have been traced. However, this claim has not yet been verified, but is believed that once this ascertained, then the constant fuel problems in Zambia would be averted in the future.

This is the third longest fuel crisis in Zambia within five years, with the most recent longest being in October 2005, which lasted for three months.