Adoption is for all of us... 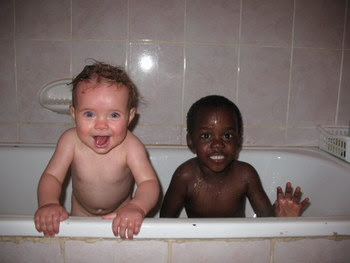 I read this forwarded article today and I just thought it was so well written that I wanted to pass it on…  Not everyone can adopt, but the question she asks is, “How can you get involved?”

Adoption is Central to the Gospel by Candice Watters

When we grasp our own status as adopted children of God, the world’s orphans take on new relevance.

When I told my newlywed friend I was reading Russell Moore’s Adopted for Life, she said, “I can’t read that right now. I don’t want to be convicted!” She assumed reading a Christian book about adoption could mean only one thing — a one-size-fits-all word from Heaven: You Must Adopt Now!

What I didn’t mention is that I was reluctant to read it, too — afraid of what I might feel compelled to do. And I suspect adoption makes a lot of believers uncomfortable.

And Moore knows his audience.  Chapter 1 is subtitled: “Why You Should Read This Book, Especially If You Don’t Want To.” Moore’s retelling of his quest, along with his wife, Maria, to adopt their two 1-year-old sons propels the story.

But what grabs the reader first is C.J. Mahaney’s foreword. In it, he confides,” I was adopted when I was eighteen years old. I wasn’t an orphan, the way most people think of that term. I wasn’t an abandonedchild. But I was in a condition far more serious: I was a stranger to the family of God, a slave to sin, and an object of the justified wrath of God.”

For all the passages in Scripture about becoming children of God and being grafted into the vine, I never truly thought of myself as adopted. Until now. Moore’s book reminded me of the powerful truth that my identity in Christ has everything to do with the shame of my sin and His utterly undeserved grace. When we grasp our own status as adopted children, the world’s orphans take on new relevance, and their  plight a new urgency.

In that light, the Moores’ journey to a grimy Russian orphanage packed with filthy cribs and neglected babies takes on new significance. That scene in Russia mirrors the scene in our hearts.

It’s a rare book that, in the words of Dr. Albert Mohler, “puts the adoption of children clearly within the context of the Gospel of Christ.”

Moore explains that adoption is both Gospel and mission. As Gospel, “adoption tells us who we are as children of the Father.” As mission, it “tells us our purpose in this age as the people of Christ.”

Moore writes, “The Gospel of Jesus Christ means our families and churches ought to be at the forefront of the adoption of orphans close to home and around the world. As we become more attuned to the Gospel, we’ll have more of a burden for orphans. As we become more adoption-friendly, we’ll be better able to understand the Gospel.”

The two are inextricably linked.  Which has everything to do with why the Book of James reads,

“Religion that God our Father accepts as pure and faultless is this: to look after orphans and widows in their distress and to keep oneself from being polluted by the world”(1:27).

Adopted for Life isn’t a book to be afraid of. It’s a life-changing narrative for all believers. Adoption may be God’s plan for your future. But this book skillfully and lovingly shows how it’s also His plan for you right now.

wow ...hits home as we in the throws of pursuing adoption for growing our family...thanks for posting