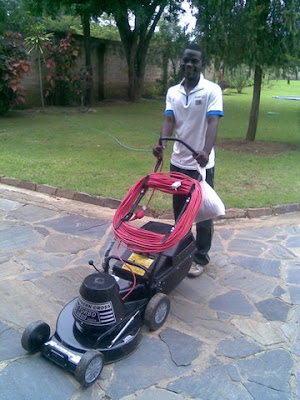 Lawrence Lungu is a hard working young man who worked for me when I first
got here. After we left, he got a different job and we went our different
ways. It was many months before I saw him again after I returned back to
Zambia. But, he came to me one morning to let me know his 1 year old child
had died and he needed a loan for the funeral. After that, we didn't see
each other much. I heard he was looking for a job but I didn't have any
openings. But, after the break-in, we thought it would be good to have a
night guard temporarily and so we hired him back. I could tell that life
had done a work on him, and the result was a much more humble, God-seeking
young man, looking to get his life right. He worked for us for about 4
months. We then found him a day job, so we let him go, but it didn't work
out. So, what to do... We prayed about how we could help him, because one,
we didn't need another worker and two, I wanted him to have something that
he could do to support his pregnant wife and young adopted daughter. Well,
there were two options. The first was help pay for driving school. The other
was buying a lawnmower. We decided to go with the lawnmower so he could
have an instant job and control his schedule. I gave him some money and
loaned him the rest. And... Well, it has been amazing. He has lots of
business and he is building up his clientele. He wants to work with me to
help budget and organize his spending so during the non-rainy seasons when
things are growing he is able to be self sufficient. It is really cool to be
able to help him, and yet, I write this because I couldn't if you didn't.
So, thank you to all who give so sacrificially to help us minister in ways
we planned and in other area we didn't.
Posted by Steve at 5:35 AM