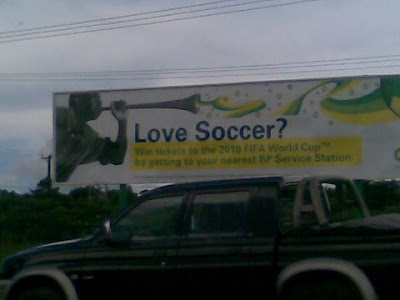 Well, I just don't quite know what is up with this area and their
billboards. The first billboard I showed you awhile back, an advertisement
from SPAR defined happy as an adverb. And then just up the street, this
billboard, "Love Soccer?" Soccer? Kamryn actually pointed it out to me.
Why is this significant? "Soccer" is called "Football" everywhere in the
world except USA and Canada. Zambians never use the word soccer and I am
sure that many/most don't even know the word soccer. They never use the
word soccer. No one does. It is called football, because, well, you use
your foot. American football usurped what shouldn't rightly be theirs in
the first place. Maybe American football should be called Throw Ball or
Throw and Run with Ball or Tackle Ball. Well, o.k., I can see why they stole
football. I digress... Anyway, I just don't quite understand why a British
company (which calls also calls it football, by the way) would spend money on a billboard advertising
something that most people read as "Love #*L#)JD?" Help me! Please?
Posted by Steve at 6:01 AM