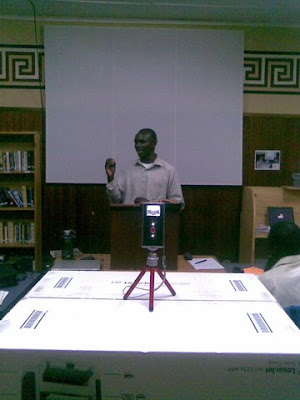 This picture is of one of our pastors, Nathan Ngoma, preaching on Colossians
a couple weeks ago. I am filming each of them with my little Flip video
camera, and then they are watching it the next class period. It has been an
eye-opening experience for these pastors to see and hear themselves on
video.

Father Ngoma as we call him is a pastor of the Anglican church in Makeni and
is a remarkable man of God. He has two children, and is expecting a third
child in March. But, on Friday I got a text from him that he had to take his
wife to the hospital because she was bleeding. So, that afternoon, Friday,
February 5, he showed up in class, a bit shaken. He shared with the class
and we all prayed for his wife and himself. Apparently, the bleeding had
stopped and they admitted her until they could decide what to do. He went
home after class and then he got a call from the hospital saying that the
bleeding had started again and that he needed to come to the hospital
immediately. They were going to have the operation in a few hours. He raced
to the hospital to be told that she was already in the "theatre room" which
is the operating room and he should just go back home. (They do not let family, friends, husbands or anyone stay in the room or anywhere near the operating room!?!?? Crazy, I know.) But, upon leaving they said that it was 50/50 whether she would die or the child would die or
both could die. Can you imagine having to go home with the possibility that
your wife may never come home? He said he didn't sleep at all that night.
He was confused and in torment.

But then he said, "Do you know what got me through the night? Bruce's
message on the Supremacy of Christ." You probably know that we are going
through the book of Colossians, verse by verse with each pastor preaching a
passage of scripture that each selected randomly. Bruce, a pastor in
Kanyama, had pulled the passage Colossian 1:15-20 randomly from a bag a
month earlier and after setting up the schedule, we just happened to be on
this passage on that Friday.

The passage says: " 15He is the image of the invisible God, the firstborn of
all creation. 16For by him all things were created, in heaven and on earth,
visible and invisible, whether thrones or dominions or rulers or
authorities-all things were created through him and for him. 17And he is
before all things, and in him all things hold together. 18And he is the head
of the body, the church. He is the beginning, the firstborn from the dead,
that in everything he might be preeminent. 19For in him all the fullness of
God was pleased to dwell, 20and through him to reconcile to himself all
things, whether on earth or in heaven, making peace by the blood of his
cross.

It is a thick passage, with rich wording and incredible truth. If you break
it down, the beautiful, hopeful reality is that all things are held together
by Christ. This was the verse that Nathan could place his hope in. He
heard also that Christ is before all things, that He created all things and
all things are for Him. Nathan heard Bruce preach that message and it
encouraged him in this class period. It was present grace. But, who could
have foreseen that those verses would also be a grace for the future to
carry him through his darkest night?

Well, Nathan went back that morning, with no clue of whether his wife or
child was alive (because they had locked away her cell phone) but with the
assurance that Jesus Christ was holding everything together. What a joy to
find his wife, not only alive, but doing well and a child, a little boy,
that was healthy. The child did have a type of cleft palate lip where the
lip did not grow together. They are hopeful that surgery will help restore
some normality to it, but compared to losing his wife and child, that is of
very little concern.

I just wanted to share this story, one so that during your dark nights, you
will find hope in God's word like Nathan did. But, two, to let you know what
God is doing in our class that is totally beyond my planning or organizing.
I am a grateful spectator and a joyful thanksgiver. I am compelled to give
God the glory that is so due Him. What an amazing God of providence.

This story reminded me of a message that John Piper gave one time I think
during the One Day Passion '03 conference where he was sharing a story about
a time when he was preaching on the Holiness of God. Piper shared how just
preached the passage of Isaiah 6 to his church with a conscious decision
beforehand to preach with no application. He just wanted to exalt God and
his holiness, his transcendence and his glory. Little did he know that in
the congregation was a family whose daughter had just suffered incredible
tragedy of violation that is a parent's worst nightmare. The parents
experienced a darkness beyond anything they could even explain, but as they
shared in a letter to John Piper, that it was the vision of God's holiness
and His glory that got them through those dark days. I have always found
that story so inspiring, but, then to be able to live this one, to see it
live, really working, inspiring, persevering is just a glorious privilege. I
had no choice but to share it.

Please keep praying for our pastors. They are going through incredible
trials these days.

Email ThisBlogThis!Share to TwitterShare to FacebookShare to Pinterest
Labels: ABI

Thanks for sharing this. It is amazing how God works.

That is so amazing. Definitely, many thanks for sharing this. Let them know we are praying for them.
-megan