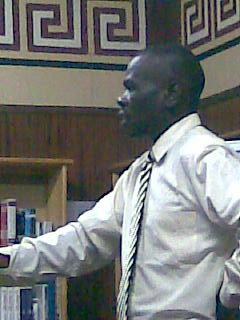 We finished preaching through the entire book of Colossians. I am planning
on putting together a kind of highlight video to show you the pastors
preaching. Getting it online is another issue, though. We'll see! Alfred
preached the last sermon covering the greetings of Colossians 4:7-18 and
wow, what a sermon. He totally nailed it. I was so proud of him. His one
big idea was: "Make Friendships A Priority." He shared at the beginning of
his sermon how difficult his past year had been. He had all his tools and
capital stolen from his shop at the beginning of the year. There was no
insurance and no way to recover it. It was devastating. Than his grandson
died, his wife got a serious stroke and almost died and then lastly his
daughter died, all in the same year. He said that it was his friendships
that helped him through it. They were the grace of God for him. He went on
to share how the Apostle Paul made friendships a priority and then he went
through all the different greetings. It was really great.

So we are finished with Colossians and now we will use the final two weeks
to work on some of the weaknesses that I saw over the two months of
preaching, and continue to do some structure practicing. April is our down
month, but it will be a fun month. Easter ministry outreaches, a 12th
anniversary getaway with my beautiful wife and our friends coming over to
play and minister to the pastors.

Thanks for all the support!