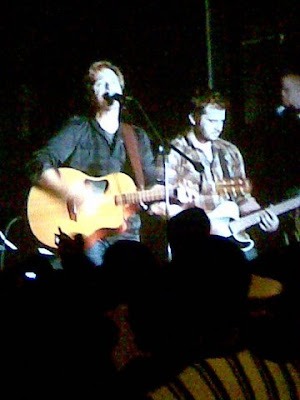 I don't get much nostalgia in Zambia. Everything is always so new, no matter
how many days go by and there isn't much in terms of history to look back
on. But, that all changed last night. Michael W. Smith came to town. I still
remember listening to his first cassette tape album and my first tape I
owned when I was 15. Now I am nearing 40, with lots of life and MWS albums
listened to over the years, this familiar voice crooning in the night
brought me back home a bit. And he still looks exactly the same. It was
quite the night, really. The posters of the concert said the concert
started at 2:00pm and went until 8pm. Hmm. 6 hours. Well, we are getting
the hang of Zambia and we decided to go at 4. We got there at 4:30. We
walked onto the field and got front row seats on the right side of the
field. Some people had been there since 1 pm waiting in line and eventually
got in at 3:30pm. At about 5, six cars roared onto the field with a police
escort, the crowd went crazy when MWS appeared out of his BMW and then he
stayed behind the Semi turned Stage for another 30 minutes. A bit
anti-climactic. Then two M.C.'s came up to welcome a very impatient crowd
and after singing the Zambian national anthem, tried to talk to a drowned
out crowd who just wanted Michael. One M.C. actually said that there was
someone in the VIP section who lost their E71 Nokia Phone and if anyone
found it, please turn it in. She also thanked somebody for making her dress.
Both of these drew a nice laugh. Anyway, the concert finally began and the
crowd started rocking out... There were probably 2000 people seated outside
the chain link fence and probably another 1000 inside the fence. They only
opened the soccer pitch when the seat outside the fence were filled up.
Thereby we got great seats. At the half line, sitting precisely on the white
line and not past it, because the volunteers in Michael W. Smith shirts were
making sure no one passed. About half way through the concert, my daughters
had to use the toilet, which we didn't really know where they were. We went
back and then front and then sideways. We saw a Zambian guy we knew who said
he would take us to the VIP toilets. But as we reached the fence to get
there, the huge crowd that were being restrained at the half line, all of
sudden stampeded forwards as if it was planned. Literally probably 500
people running forward to the front of the stage as fast as they could.
(Our friends, the Whitfields and the Carrs who had been there since 2 to get
the best seats (they were front row) were trampled by the people surging and
had to encircle their kids to keep them from being hurt). Anyway, needless
to say, with people from the outside now wanting in, we decided to forgo the
bathroom experience and just stay inside. We found Mommy, who had surged as
well, and now we were only 50 feet away instead 500. The girls were a bit
shook up by it, but after a bathroom stop later and some snacks, settled in
nicely. The Nostalgia factor waned a bit at that point but came back
quickly with the old familiar friends are friends forever and some of his
new hits as well. The Zambians loved when he sang some familiar worship
tunes and it was a nice time. We left early, beating the crowd. As Tim and
I tried jumping my car (I left the lights on) Michael W. Smith and his
entourage came flashing by. The concert started at 5:30 and ended at 7:15.
Hmm... Well, it was worth it for a bit of nostalgia in this foreign land.
Posted by Steve at 11:35 AM