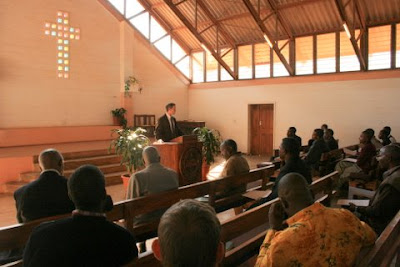 "He is going to hell!" I sat in my wicker chair, dumfounded by my two
Zambian friends. A missionary with our team had been creating a 12 week
basic discipleship course crafted for Zambians, using cultural illustrations
and simple verses to help them understand the gospel.

The first lesson started off with the following illustration: A Christian
man got on a mini-bus (the form of transportation here in Lusaka) and forgot
to pay the driver and the driver forgets to collect the money. Midway
through the bus ride, the Christian man remembers that he did not pay the
driver but decides not to say anything. He gets off the bus and then gets
hit by a car and immediately dies. My friend then asks the question in the
study, "Will this man go to Heaven or Hell?" My friend shared with me
after explaining this story, "I have never met a Zambian who didn't say
hell. They just don't understand the gospel." I found this too difficult to
believe, so I decided to try it out during a weekly bible study with a
couple Zambian friends. I had been spending months with them going through
the scriptures and was fairly confident they would say Heaven.

I would prove him wrong.

But, sure enough, both of them confidently said, "Hell!"

They responded in unison "Because he sinned."

I was so stunned I didn't know how to answer.

I know that even in America there are denominations that would agree with my
Zambian friends assessment of salvation, that you can lose your blood-paid
salvation. They are members of churches that would ignore the ingenious
interwoven tension between predestination and perseverance. But, at least
most are educated enough to make that decision. But, in Africa, the problem
goes much deeper. There are pastors across denominational lines that seek
to control their congregations with a legalistic and joyless religion that
keeps people obeying out of fear rather than love.

These pastors either out of lack of education or a quest for power heap
burdens on their people and do not lift a finger to help them out. So, their
eternal destiny lies in the power of one badly timed decision.
After recovering from my shock, I had them open the bible to Ephesians and
read the first 15 verses. After a conversation explaining the importance of
predestination and sealing, the young lady's smile seemed to beg the
question, "Is this just too good to be true? "

After sharing about how grace motivates obedience because of God's lavishing
love, it was as if saw a physical burden lifted from her shoulders. Her
smile said it all.

That next week I posed the same question during a talk on the gospel at a
preaching conference with about 50 pastors. More than half responded that
that same young man was going to hell while a smaller minority raised their
hand believing that somehow this man would still go to heaven. I looked at
one of the majority pastors and said, "Are you married?" He replied, "Yes, I
am." "Do you ever sin against your wife?" He smiled and said, "Yes, I have
sinned against my wife." In spite of the translation transition, the
pastors saw where I was going and they began laughing and speaking rapidly
in Nyanga, their native tongue. "Well, I asked slowly, "Are you still
married?" He didn't even need to finish the sentence because he knew why
I was asking the question. I continued, "But you sinned against her. How
can you still be married?" I then asked about my adopted daughter. "If my
adopted Zambian daughter, the one I chose, the one I love, were to sin
against me, is she still my daughter?" I led them through some very basic
verses about the gospel how God chose us, adopted us and sealed us and in
just a few minutes, a very major doctrine became clear.

Of the minority that did raise their hand that this man was going to Heaven,
five were in our ACTION Pastor's College and a few others had gone through
our 1 year discipleship course. I was delighted to see they understood, and
that the teaching was paying off. It doesn't take much to bring a freedom to
serve by faith. It doesn't take much, just some time letting the Bible
transform a culture so that the Word can expose the lies and reveal the
truth. Perhaps it just takes some blessed feet to bring the good news to
these Christians so they can be born again for the first time.

That is AWESOME! Great illustrations to make it clear.

This is an amazing post, Steve. I couldn't think of a better explanation of why ACTION has its PLD ministry. Thank you for your ministry to Zambian pastors. And, by the way, we encounter a similar struggle in Cuba.