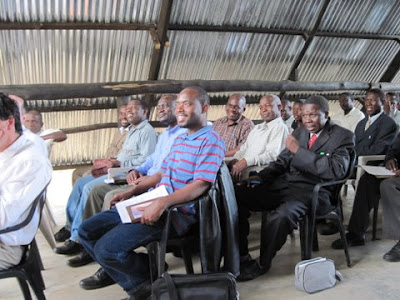 "See this is the irony of it all. The reality is that you don't really
believe what you say you believe!" I boldly asserted, letting the words echo
off the walls. The look of shock was obvious. I had singled out the four
guys who said that they would go to hell for willfully sinning before they
died and then told them they didn't really believe what they were
passionately defending.

I continued, "If you really believed that you would go to hell, that if your
last act on earth was a willful sin, then you would be living a lot
different than you do right now. You would be living in fear. You would be
living afraid. You would scared to do anything. You should be scared to do
anything. But you are not. You live with joy. So, this is the problem.
We live one way and then we preach another. We are like Pharisees, loading
up the church goers up with laws and rules and works salvation and yet you
don't live like that."

My plan for that class was to talk about the gospel. I wanted scripture to
convince my four friends and any other less courageous believers who didn't
vote but still believed, that one badly timed decision was not going to
result in eternal hell. My goal was to teach them in such a way that they
could teach others. So, I taught an easy to remember four categories.
GOD-MAN-CHRIST-RESPONSE. (I have learned a lot of ways to teach the gospel,
but the one I got from the book "What is the Gospel? By Greg Gilbert is my
favorite).

We looked at God, our creator, a holy God who has the right and authority to
require holiness of his creation. The problem is that Man is willfully
rebellious and sinful and has rejected God. The result of man's sin of
rejecting God is eternity in hell. Jesus Christ willingly suffered a death
as an atonement for all our sins so as to destroy the power of sin, death
and Satan. The Father placed the sin of the world on his Son, so when God
looks at His son, he sees the wretchedness of our sin, and when he looks at
us, he sees the righteousness of His son. Therefore, there really is no
condemnation. The punishment for the sin has already been covered. So, what
do we have to do? We have to respond in faith and obedience to that message,
believing that His grace is enough to cover our sin and the result is
eternal life with God in heaven.

So, in essence, that was the outline that I followed. So, I started slow,
just setting them up, wanting to build my case slowly and surely. I read a
verse in the Christ section: Romans 5:9 - 9 Since, therefore, we have now
been justified by his blood, much more shall we be saved by him from the
wrath of God.

I showed them how the original Greek grammar was broken down. The word
justified means to acquit, to be made right or righteous and to be set free
from the punishment that I justly do. But, I remember it best by something
Stephanie once taught me: to be justified means that it is "Just As If
I'ved" never sinned. I like that. The result of the cross is a life that
looks like I have never sinned in the righteous eyes of God. Sure, I still
sin. But, the punishment for that sin is laid on Jesus, forever, both past,
present and future sins. That is what the second part of that means. It
isn't just my past sins. It is my future sins as well. We shall be saved
from the wrath of God. The word saved is a future tense, so it is will take
place in the future and it is also a passive verb, which means it will
happen to us, apart from our doing. And it is an indicative which means
that it is an actual thing, not just a possibility or an idea. It's a for
sure thing. So, this idea of being saved, from the wrath of God, is a verb
that will take place, a promise. I will be saved from the wrath of God, but
the being saved isn't something I do. It is someone else saving me. And it
is something I can bank on. We are justified now and we are saved then.

I saw a lot of nodding heads. It seemed to speak directly to this issue
that I can affect my eternal destination by a wrong move at the wrong time.
(We are saved by grace and yet condemned by works?) The wrath of God is not
going to be subverted by an unrighteous act. He has already paid that price.

We also talked about 1 John 2:1-2 - 1My dear children, I write this to you
so that you will not sin. But if anybody does sin, we have one who speaks to
the Father in our defense-Jesus Christ, the Righteous One. 2He is the
atoning sacrifice for our sins, and not only for ours but also for the sins
of the whole world.

We have one who speaks in our defense. We have a lawyer who has also paid
the required punishment I deserve and whose dad is the judge. He has us
covered for whatever, whenever...

So, the guys seemed shock by my comment, but they didn't respond. I moved
from teacher to preacher and no one comments when the preacher is preaching.
On the way home I asked one of the four pastors if he was convinced yet. He
said, "Yes." And I asked him what did it. He said, "The passage in First
John. That was a good one." I think that was ironic, my last verse that I
shared with them all, and one verse that I hadn't planned on sharing. I
wonder how it will affect him. I hope it produces in him even more joy and
thankfulness. I think this is so much the issue. We don't really know how
to live what we learn. And this seems to be so especially true about that
gospel. Whether we believe something we don't live or don't believe
something we do live, it is very difficult to get the truth from our brains
to our hearts. I was referred to this great illustration by my friend Jeff
Bucknam. Thought it applied so well to the struggles we see here in Zambia
(and around the world, for that matter.)

Tim Keller was talking about a coke machine they have at the basement of
his apartment. He would put his money in, and push the button, but nothing
would happen. He learned through experience that you had to hit the side of
the machine to make the money drop. Once it drops, the coke was his. He
said the gospel is a lot like the coke machine. Most people believe it that
way. It enters the head and yet nothing happens. They still act anxious
when life gets stormy just like everyone else does. They still are barraged
by fear when life is uncertain just like everyone else. They treat people
with the same lack of love (sometimes worse) than everyone else. In
essence, the gospel make no difference on a life. But, as Keller pointed
out, if you pound the gospel in from the head until it drops to the heart,
you push the buttons of life, and out comes graciousness to a co-worker
instead of sarcasm, gentleness towards a unruly child or forgiveness for a
spouse. We need to keep preaching the gospel to ourselves until the grace
that saved us is the same grace that sanctifies us.

This week I will be doing some serious head pounding in my own life as well
as the pastors. I read a great tweet this week: "Gospel proclamation to the
ends of the earth tomorrow begins with Gospel proclamation to self today.
Heart-Church-World.(burk_parsons)" I love preaching, but my heart better
starting listening! Listen up heart, you are sinful, saved and loved!!!