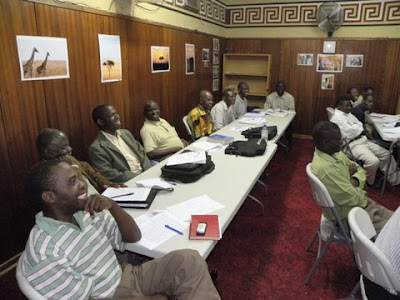 Like a pair of well-worn jeans or a Honda Accord that just keeps on driving,
I intend to use this Mini-Bus illustration until its edges are frayed and
every last soul in Zambia has answered the question to God's liking.

I was in a taxi on the way to class. I would normally take the mini-bus when
my wife needs the car, but this day, I had run late with my weekly bible
study, and so taxi it was. I got in the front and started in on some
conversation about the World Cup. It is a great conversation starter because
you are guaranteed a conversation wherever you are. But, it flopped. Hard.
He didn't care or he couldn't speak English. I wasn't sure. I sighed. It is
one of the struggles living here in Zambia, trying to have conversations, at
a deep level, with people who just don't have a large capacity to converse.
I don't remember another word for about 10 minutes. Finally I asked, "Do you
go to church?"
He said, "Yes."
Most everyone does, at least have a church they call as their own.
"Pentecostal Holiness. In Matero." "Are you a Christian?" I asked.
"Yes." He responded.
I pressed in deeper. "What does it mean to be a Christian?"
"You accept Jesus in your life."
"What does that mean?"
"What do you mean, what does that mean?"
"What does it mean to accept Jesus?"
"You believe in Him that He died on the cross for our sin."
"How does accepting him help?"
And so the conversation ensued.

I have been studying the gospel a lot lately, and so it was fresh on my
mind. I asked him what the gospel was. He tried to explain it, but when
pressed for verses, he came up blank.

We reached my office, and we made an agreement for him to pick me up at 17
(5:00pm for you non 24 hour clock people). I told him I would share the
verses with him about the gospel when he picked me up. So, after a great
class, he was there, at 17, mzungu time. He was a bit surprised when the
one of my pastors, Patson Sakala, got in the car with me, but after five
minutes of driving, the taxi driver said, "You said you were going to share
some verses with me." I said, "Yes, I will, but let me first ask you a
question. There was a Christian who got in a mini-bus (same story, but in
case you didn't read part one) and forgot to pay and the conductor forgot to
ask. Midway through the ride, the Christian remembered and yet decided not
to pay. He felt a little guilty, but figured it was the conductors fault.
He got out the car, looking back to make sure the conductor wasn't coming
after him, and didn't see the oncoming car which hit him and he was
instantly killed. Is the man going to heaven or hell?" The man, smiled,
paused for a moment, and then said, "Hell. He's going to hell. He sinned, so
he is going to hell."

I am not surprised anymore. I haven't had heard the "Heaven" answer yet. I
asked, "Are you married? Yes. I am married. Have you sinned against your
wife? Yes. Are you still married? Yes, I am still married. But, you have
sinned against her." Pause. Longer pause.
We shared some verses. Then I let Patson at him. He was like a pit bull.
He was nice and loving, but a pit bull nonetheless, being held back by his
master, because when I said, "Patson, do you have anything to add, he
practically jumped into my seat with passion and tenacity. He used the
illustration of the driver being a taxi driver. If you crashed, would you
still be a driver? Yes. If you drove bad, would you still be a driver? Yes.
We sin. We are sinners. But God paid for all our sin on the cross. It
doesn't change the fact that you are still a Christian even if we do sin."
As he pulled up to my gate, I gave him my bible, with the verses written on
the front, from Romans 1-4 that give a clear illustration of the Gospel. He
was very grateful. Overwhelmed, I think. And grateful. "Any time you
need a ride, just call," he said.
The next class, I started teaching on the gospel. And, just for the heck of
it, I shared that story again. And guess what, four pastors thought (with
conviction) that this man was going to hell. I was surprised, as well.

So, I went to work. "Are you married? Do you sin? Are you still married?"
I made my first chink in the armor. Second, I asked, "I called, chose,
adopted Rhoda, and gave her a new name, future, inheritance and life. If she
sins, is she no longer my daughter?" Another chink.

I asked them to find me verses that would support their position. Somewhere
in Isaiah. Man is separated by sin. A verse from Hebrews. Another verse from
Romans. The rest of the "heaven" guys just sat patiently, quietly, humbly,
waiting.
If the Christian guy deliberately sins, he deserves hell." One pastor said,
passionately.
I asked, "What if he forgot to pay. I mean, he still stole, but he just
forgot. Is he still going to hell?"
"Uh. Well, I don't know. I don't think so."
"So, only sins that you do intentionally? How about a lesser sin than that?
How bad a sin would require hell?" He didn't really have an answer for that
question.

"Of course you do. There is no joy living a life where one bad timed
decision could land you in Hell."

But I didn't reveal my hand, just yet. I knew that I was running out of time
and so I decided to save my heavy artillery for the next class.
I asked another, "God knows everything, right? He knows when you are going
to die before you are even born. He knows the number of hairs on your head.
He knows the word you are going to say before you say it, right?" "Yes."
"So you are saying to me, that God knows all these things, He chose me, He
let his Son be crucified for all your sins, he forgave all your sins, and he
loves you through it all, and then you commit a sin that he already knows
you were going to commit and he still sends you to Hell?"

"Uh, yes." Not a super convincing response. Chink. Chink. Chink.
I had never seen such a lively response in Nyanja after class was over. They
were chatting up a storm, all together in a group, just outside the office.
It was beautiful. Probably even better if I could have understood them.

On the way home, I usually take home a few pastors that live on the way.
One of the pastors that thought hell was in the car. He brought up 1
Corinthians 9 about being disqualified for the prize as proof that you could
end up in Hell. I gave him the illustration that if Brazil was found
cheating in the world cup for taking steroids, would they still be soccer
players? Yes, they would be. They just lose the rewards. That seemed to make
sense to him. He was so passionate up to that point. I asked him to read
Romans 6-8 before class again.
I can't wait for tomorrow. I just want these pastors so badly to know that
when God said there is now no condemnation, there really isn't. And that is
just the start. Tim Keller has opened my eyes to a whole new living out the
gospel in the context of life. The gospel is not the A-B-C's of
Christianity, but it is the A-Z's of Christianity. It doesn't just get us
in the door, but the Gospel impacts every part of our life. And, it starts
with living securely in the final work of Jesus (it is finished) on the
cross in such a way that one badly timed decision will not result in Hell.
He endured the cross for the joy set before him so we could have the joy of
serving Him. We don't obey to be accepted by Him. We obey because we are
accepted. And the result is a praying, church attending, worshipping,
Bible reading, joy-filled relationship with the loving Creator. That is my
trumpeting call over here anyways.

Great stories! I really like your minibus analogy and will probably use a version of it sooner or later. These are the things I like to read!