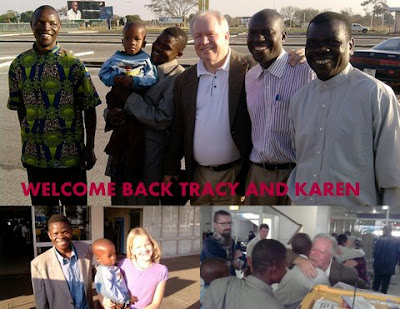 We welcomed back Tracy and Karen Singleton at the airport last Thursday from
their four month furlough. I asked my pastors during a class if any of them
would like to come out and surprise Tracy and a few of them that lived close
to me enthusiastically said yes. So, I picked them up at 6:15am and we went
to the airport. On the way to the airport, they expressed how thankful they
were that they could come with us, because as one pastor said, "We have
never come because we have no reason to be here, no one to pick up." I
don't think any of them, maybe minus one, had ever been to the airport in
their 40+ something years of life here in Lusaka. Needless to say, it was a
great surprise for Tracy and Karen. They expected the missionaries to come
but they didn't expect the pastors. They had missed Tracy very much during
his furlough and it is good to have him back. After saying hellos and
goodbyes, I told the pastors that he came back for them. It was a cool
insight for me as well, to hear myself say that, because in essence, it is
true for me as well. We are here for them. We have sacrificed so much to be
here to serve God in a foreign land for these pastors that they might be
equipped, encouraged and sent out to lead communities to Christ. Though
while saying that might be true, I still say we learn more from them than
they do from us.