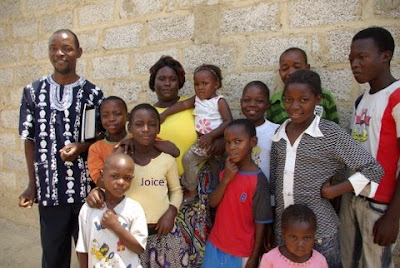 We Allen's had a busy day today watching three extra little ladies of some
friends of ours who were moving. We had a blast playing spoons and making
projects. But, that isn't what I want to blog about. Today I went with my
friend Luke to pray for one of our pastors in our program. Patson's wife
Patricia had been suffering with some pretty intense stomach pain for a
while. So, we went to their house way back in the compound and into the
church/school that he built. After finding out from Patricia what was
wrong, Luke began to ask some questions. He asked if there was fear she was
struggling with and then begin asking about dreams. He uncovered a lot of
struggles going on in her life that were both physical and spiritual. The
Holy Spirit gave him insight into situations that were more than just
physical and she was so surprised that he could know things that he or she
did not know. (Often here in Zambia, physical pain is a result of something
going on spiritually. Maybe that is even the case in America as well. It is
always good to think spiritually in these times, at least that is what I
learned/am learning.)

Then Luke said, "Before we pray, I feel like the Spirit is saying that there
is one more person in your family who is also struggling with fear and who
also has problem with nightmares. Patson and Patrica looked at each other
and both said together at the same time, "Joyce." So, they brought her in to
the room. Joyce, a pretty little 10 year old, was understandably shy and
nervous. Luke kneeled beside her and began to tell her that she was in God's
hands and that no one could do anything to touch her because God would
protect her. Right then, I had this sense that we shouldn't just assume that
she was a Christian. So, I stopped Luke mid-sentence and said, "Do you want
to make sure she is a Christian?" He stopped and said, "Yes, good point."
We looked to Patson and said, "Is she a Christian? Are you seeing any fruit
of the Spirit to signify that she is?" They both said, "No. She is not a
Christian." Luke came back to sit by me and said, "Why don't you help her
Steve to become a Christian." I was instantly reluctant because I didn't
want to take Patson's place as both father and pastor. But, Patson said
something like, "No, Steve, one thing you don't know is Zambian pastors
don't know how to do this very well." In essence, what he was saying was
that they knew how to pastor other people's children, but no their own.

Well first of all, that was a huge insight and helped me in terms of
thinking on how to help this cultural issue with pastors and their own
families that I had no idea about. But, secondly, I had a chance not just to
lead her to Christ, but to help model how to do that for Patson. I asked
for the Spirit to help me and I was given the amazing privilege to lead her
into a relationship with Christ through her father as a translator. It was
awkward, not really cultural and with words I have learned over the years.
It was what it was. But, she prayed the prayer and even better, we were
able to encourage her in her life. I saw something of a picture of her
teaching one day in this classroom we were in. We prayed over her future as
well. Anyway, that was amazing and we hadn't even prayed for Patricia yet.
So, Luke wanted the whole family in so he brought them in and they all held
hands. Then Luke and I prayed for her, for her stomach and her teeth that
had been hurting. And guess what, her stomach pain was healed! I know this
was real because she said her tooth still hurt. Sometimes when we pray for
Zambians we wonder if they are telling the truth. If they are just trying to
make us feel good after we pray... Well, in this case, we could see it. Not
only was just healed from stomach pain, but I am confident that her dreams
and fears were dealt with as well. Anyway, it was a really blessed hour we
spent there... (Note: I just got a text from Patson that Patricia is free
from the pain and Joyce slept through the night.)

Please continue to pray for Patson and Patricia who are on the leading edge
of community development through their church and community school. Truly, a
light on a hill!

Wow, Steve, lots to think and pray about!

Thank you, Steve, for sharing this. There's just so much to what you've written--things I can't express here. I sense there is so much more to this life we're called to--so much more depth and breadth. May God continue to bless your ministry and guide your path.