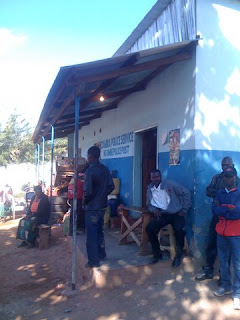 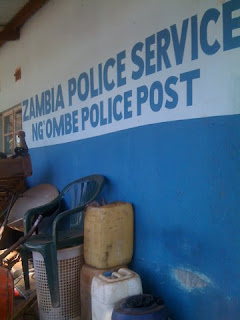 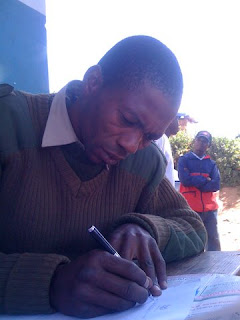 Well I am surely making the most of my experiences here in Zambia. I
spent last Sunday morning at the police post and was charged with
contravening while driving. I paid a fine for k270,000 and was late
for church. And yes there is a story to go with it. I had taken my
youngest daughters for a little daddy/daughter/donut date. I had a
few moments before church, so I took a different way back, saw a guy
running because he was late, so I let him jump on the side of my car
(running board for the feet and roof rack for the hands) and I was
going to drop him at the mini bus location. Well, he wanted to go
further than I thought, and after crossing a street, heard some
insistent honking behind me. A police truck passed me and then cut me
off. The guy on the side of the car started running away! He was
tackled and then manhandled and then put in MY CAR, between the two
girls car seats in the back seat, and I was given orders to drive to
the police post in Ngombe. At this point, Rhoda starts bawling and I
was pretty angry. I mean, if you could only see how people hang out of
trucks and cars here, and I was just helping the guy out, well,
yeah... enough said. Anyway, I told him I was driving my kids to my
house to drop them off, and I did. After some Zambian friends tried
talking to the police to let me off, to no avail, and after I had
cooled down, I went to the police post. As you can imagine, I was a
spectacle for all to behold. I was the ONLY white person around. I
gave them my keys and then had to wait for an hour while they filled
out this paper work. It was pretty interesting spending part of the
morning at the police station. The jail was full, people were standing
around, and the police were busy doing their work. Things ended fine.
I had a good chat with the police lieutenant as I paid my fine and I
appreciated and respected them more than I had before. It is a hard
job, being a police for such a difficult society. Police work in
general is hard. It helped me to respect them more. At least these
guys. As I was leaving, he asked me to say prayers for him at church.
I did that morning. I was wrong to put the guy on the side of my
car, even though I didn't realize it was wrong. The guy on the side
of my car? Well, he was released partly I think because I took the
blame. As for my charge of contravening. I confess I had to look it
up in the dicitionary. I went against the rules of driving. Who knew?
Posted by Steve at 1:57 PM