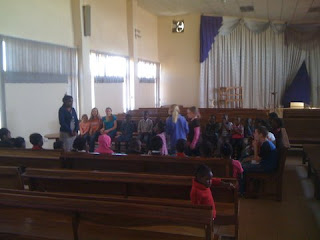 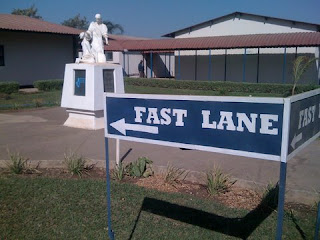 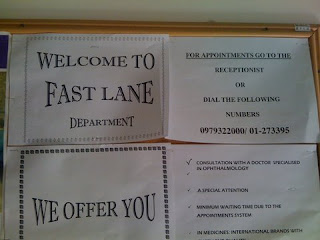 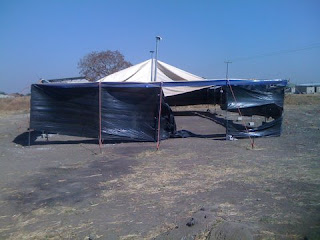 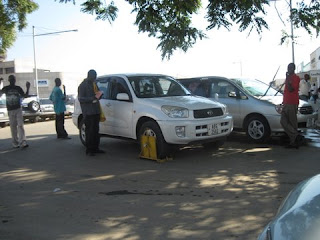 You could make my day by reading about my day. It was such a crazy day that I don't even want to relive it and I know it would take forever to write about it... So I am utilizing the work of my friend and former intern and soon to be partner in ministry, Tyler. (But more on that later)

It started at 5:15ish, when I sat down with my wife for a morning time in the Bible to have the power go out...  At 5:15 it is still dark, so we got our kindles and prayed. Thankfully the coffee was already done, but no power meant no hot showers.

And then the day went like this (as written by Tyler):

What a day. A day in Zambia is as unpredictable as Wall Street and I experienced the ups and downs today.

The Good – one of our pastor’s (Patson) mom has been having incredible pain in her eye. Steve and I took Patson and his parents to the eye doctor. I was trying to wonder what this old woman, who was in obvious pain, was thinking as she was driven around in some mzunugu’s (white person’s )car. We took her to the eye clinic where there was literally, a slow lane – cost to enter 30,000 kwacha or about $6 – and a fast lane – cost to enter 150,000 kwacha or $30. Talk about two-tiered healthcare….Obviously, the slow – aka the poor – lane was packed and they could have waited all day and still not been helped, so I paid the $30 plus a little for extra medicine. Since Steve and I weren’t in the room with her we don’t know what exactly was the problem but it is an eye infection. Please pray for healing.

The Bad – Steve took me to a place where a guy could unlock my iPhone which was downtown. Parking is scarce and it’s dangerous to leave your car alone, so a grassroots industry has started, where guys will direct you to a parking space and protect it for a dollar or so. Well, where there is a place to make a buck, there is a place to scam another buck, so what Steve and I found out was that the “parking attendant” and the parking police have a nice system going for you. The parking guy directs you to a spot where you are told to park. You go in, run your errands and come out to see a traffic boot on your wheel because you parked in an illegal spot. Not only is the parking attendant not around to defend you or take blame for it, when you fork over the cash to get out you see him and the parking police guy laughing together. Well played sir, well played.

The Ugly – One of our errands today was to stop by and visit with one of Steve’s pastors, Bruce, and talk about Ciyanjano. Steve told me that they recently got a tent to have church in. Zambians are very particular about their churches. They believe that the better the physical amenities are, the better the church will be. So, if a church doesn’t have a cement floor, or bad pews they will not come. Bruce’s tent was in a prime spot on the corner of 2 major roads with new houses being built all around them. This tent was great and new people were coming from all over, the potential was amazing.

So as Steve and I drove up I noticed 2/3rd of the roof was gone and the walls were made from black plastic tarp. Something didn’t look right. Steve said that someone had stolen the fabric for the walls but they have been recovered by the police. Bruce met us there at the church site a few minutes later and he said last night thieves came and cut off the bottom of the roof and ripped the top off. To say we were devastated would be a gross understatement. We stood there in utter silence, the only sound was the torn plastic flapping pathetically in the wind as if to taunt us. It was a sucker punch to the soul. As Bruce began to cry I could not imagine what he was going through. The 4 grand it took to buy the tent was donated by a church in the US and for the Zambians to raise that much money it would take a miracle.

Talking to him about the situation not once did he complain about what he was going to do, how was he going to feed his family, or how was he going to pay for the medical costs for his pregnant wife. As a pastor his only income is dependent on the meager donations from his church and if people stop coming because the tent was stolen he’s not going to have any income.

Please pray for Bruce and his church. He is an amazing, kind hearted spirit, with a gift for pastoring people. Pray that God would guide them through this extremely difficult time and a solution would be provide.

That didn't include our water going out because I was a whopping 16 days late paying the bill, costing us k100,00 reconnection fee (thankfully it came back on later after paying the bill) and the power going out again later that night...

I hadn't had a day like this in awhile. It was a good thing Tyler was with me, as he prepared to move back here after he has raised his full support.  Check out his blog here to learn more about his journey. All in all, we survived.  Just thought it would make my day if