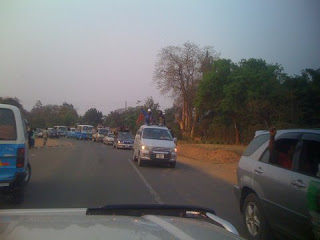 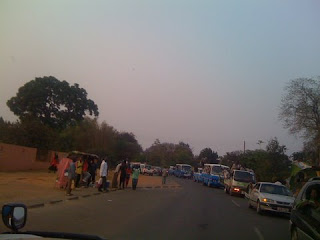 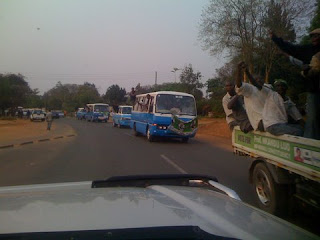 Well the presidential election is a few days away and campaigning has
reached a feverish pitch. Here are a few pictures of a stream of Sata
supporters five kilometers long. I don't think many need to learn how tense
elections are in a country in Africa. There are so many issues at hand and
the threat of violence has caused most to cancel classes, ministry, work and
their plans this week. Please pray with us for peace and fairness to
abound. We would love to report back at weeks' end how great things went...
Oh, "don't Kubeba?" What does that mean? It is the slogan for the opposing
party which means, "Don't tell" anyone you are voting for Sata. Honestly, it
is a brilliant slogan that may do some damage against the current president,
Banda. We'll see what happens. My predictions: If Rupiah Banda wins in a
landslide, there won't be much rioting but if he wins close, the Sata
supporters will riot because they will fear that the voting has been
tampered with "again". Banda is like the Republican president and Sata is
like the democratic president. Sata is favored by the poor as a man of the
people where Banda is favored by the rich who is bringing in lots of
foreigners along with their money and investment. Some have compared Sata to
Mugabe in Zimbabwe which has many in his country a bit nervous, especially
the foreigners. Anyway, there is the political landscape in a nutshell.
Posted by Steve at 7:43 AM