Timing is everything, or Our Rite of Passage

Greeting blog friends, I asked Kamryn to write this blog today. Figured our
lives were getting a little too routine that we needed something to awaken
our yawning readers, a little blog rating boost for you today. Enjoy!
Hey guys, Kamryn here. We have a major blog on our hands, hence part of the
title. This blog is about Dad's and all of ours right of passage. Hence
the title again. But why the "timing is everything part?" Listen closely.

It was a Tuesday, a hot one. Dad and Julia were sick, and our gardener was
at school. Aunty Mirriam was swimming with Jojo, and I had just finished
helping Rhoda read, when Aunty Mirriam rushed in with Jojo, her face white.
And she said,"(Listen guys, this part is important)There is a huge snake!!!"
So I ran out to the porch with her. The snake was in the bushes, and pretty
soon mom joined us. She said, "What is it? " "A snake" we all said. Now,
Aunty Mirriam doesn't exaggerate. So when she says huge, she means it! And
when that thing slithered out of the bushes, I knew that was the biggest
snake we had ever seen in our yard. Let me rephrase that. The biggest
snake I have seen in Lusaka. I am not joking.
Now do you see why I said timing is everything? Dad was sick. Mwape gone.
What do we do? Get dad.
Poor sick dad in his room, was texting mom. He was oblivious to the chaos
going on outside. This is what he was texting," I am sooo sick. I feel
like..."and that is when mom burst in.
"A snake!" She panted. Guys, this is Non-fictional! True story! And it
only gets worsen (although it does have a happy ending!) So my poor sick dad
leaped out of bed, and ran down the hall. Meanwhile...
The snake was getting away!!! I was getting ready to throw something at it,
Aunty Mirriam was saying, "Where's Daddy?" Rhoda and Bradyn were holding on
to Jo who wanted to go see "her snake." And then daddy arrived. Aunty
Mirriam scurried off to get some rocks, while Mom went across the street
looking for someone to help dad get it. But it was me and Bradyn who
managed to get some people. When the guy came, the first thing he said
was," That snake is VERY dangerous. It is very poisonous." Well thanks,
Mister.
SO they started throwing rocks. The snake shot out of the bushes, and the
men were throwing furiously. Dad got it once, but it didn't stop. They
chased it up the yard, and the snake slithered into a crack between the wall
and the guardhouse that was full of junk. What to do, what to do? I know!
The man walked out of the gate and went back to the house where he was a
guard, and came back with another man and a long stick(plus a hoe.) They
got all of the stuff out of the crack, to find the snake standing straight
up in a crack in the wall. Great. Go in there to get it, and never come
out again.
While we were standing there pondering, a random guy from the street came
in. "Hello" said mom. But this is just what we needed. One of the men
had such a brilliant idea. Why not climb onto the roof of the guard house
and to pour paint thinner down the crack that the snake was in? BRILLIANT!
BRILLIANT, I tell you! The paint thinner would burn the snake, so he would
have to come out! Then we wouldn't have to go in! So the guy got up there
and did it. It slithered out, and dad screamed," Its coming!" And then
I... climbed on top of the car. Not my bravest moment, but really, what
should I have done? And then POW! Dad nailed it with a rock! And then the
other guys hit it with sticks and then Dad flattened it's head with a
shovel! You know, the only time I appreciate snakes are when they are dead.
Especially BLACK MAMBAS that are FIVE FEET SEVEN INCHES LONG!
OH YA BABY!
So, that's our morning. A classic day in paradise!

We finally killed a BIG DANGEROUS snake all by ourselves! We have earned
our rite of passage to being a proper Zambian! Which of course, isn't easy
I assure you! 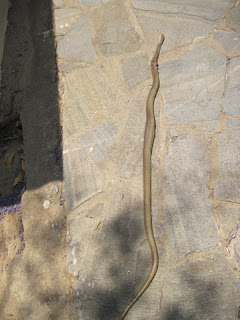 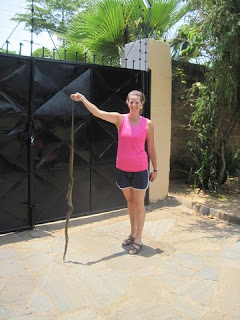 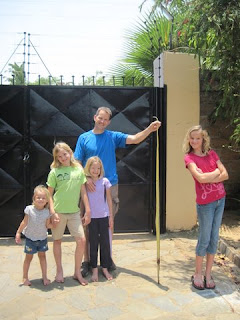 Well, since our guard Mwape didn't know about the occurrence that day, we
missionaries decided to do something which would scare the skin off him! We
laid the snake in front of the door in our gate, and we waited. No, I
waited. And I say from personal experience that the result was TOTALLY
AWESOME!
BYE!

So, Steve again... Check out the video and let it be known, that Stephanie was indeed the first one to pick up the snake... Brave girls I live with!

THAT was an amazing video. It was nerve racking just watching!! Kamryn's blog was awesome!! Great writing Kamryn! I can't believe Stephanie's picture holding the awful snake!! yikes!! You guys will always have some amazing memories of Zambia...!!! Hugs...

We really enjoyed reading your story Kamryn!! It was very expressive and interesting (My mother-in-law agrees). The video was hillarious...I'm pretty sure I would have been inside or on top of the vehicle. You're a pretty brave woman Steph!

I just showed the snake video to my kids! They wanted to watch it again and again! Oh the great entertainment you have provided here in New Mexico this AM!!!!!! Way to go guys!

You guys are amazing! I love the story about the snake- they are definately some brave girls!

Epic! And nice job on the writing :)