An underdog story for the ages

Everyone loves a good underdog story and I am no exception. I love the David taking down the Goliath in sports, business, and life.  But, when you get to watch an underdog story, up close and personal, happen to a good friend and the nicest person you’ll ever meet, you have to blog about it. Dailess Nalwamba, our babysitter, a former nun, the sweetest and most gentle and hardworking girl you’ll ever meet, has such a story. 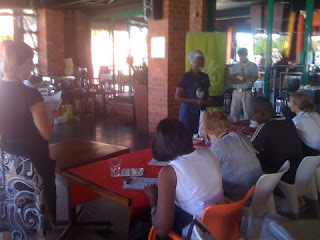 The story starts many years ago when she moved to Kenya to start her formation to be a nun.  It was her calling and her desire to spend her life in a convent, serving God. But she got sick, so sick that she had to move back to Zambia. Discouraged, she tried to move forward with a new life. She started cleaning houses and working with her aunt in a ministry called Chikumbuso. Chikumbuso reaches out to the most vulnerable in Zambian society, widows, orphans, young single mothers, young men, and grandmothers. One of the income generating activities of this organization is that the widows are trained to crochet beautiful handbags out of recycled plastic bags.  Some of you have been the recipients of these bags that Stephanie has brought home.  Dailess is also our girls favorite babysitter.  She is sweet, funny, firm, and faithful.  Anyway, an American named Bob Keating decided to open a café called the Blue Moon Café.  He brings in bagel sandwiches, blizzard milkshakes and Snapple. It became one of our favorite places to go.  So, Bob, instead of hiring people from the marketplace, partnered with Chikumbuso, to bring in some of the women who made handbags and train them to make coffee, sandwiches, and handle money. 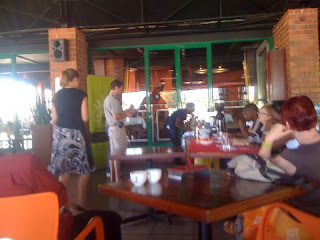 Dailess is one of those young ladies, and she was introduced to the world of coffee.  Not just drip coffee, but espresso......cappuccinos, lattes, and macchiatos.  She practices, she befriends her customers and soon Dailess is a mainstay. Until, she almost wasn’t.  A year in, Bob had to make some cuts. Dailess was afraid she was going to lose her job.  She prayed. She asked us to pray. And she stayed, thankfully.   She was part of a barista competition last year.  She didn’t even make it out of the semi-finals. “It was my first year. My first time competing and I was nervous,” she shared with me later that night on the way home after babysitting.

Dailess wanted to be a nurse. She had saved money to go to school. One day she was waiting to deposit many babysitting nights and housecleaning days worth of work into the bank. The line was long and she decided to go to a different bank. Someone was following her. Watching her.  This thief came by and ever so gently, slid a knife right under her purse. All her saved money, gone.  Her friend’s computer hard drive. Everything. Gone.   We found this out the day she was going to babysit for us. That night, she made a record amount for just four hours work.

She kept making cappuccinos and lattes, working two to three days a week.  We would see her there on occasion. But usually it was for an afternoon Blizzard splurge so we didn’t get to experience the progress she was making in the espresso world.  We didn’t know what a knack for steaming milk and coffee she had developed.

Another setback. I was on kid duty and had all five kids with me on an afternoon after horseback riding. It was supposed to be Rhoda’s special day. She wanted Ice Cream. We stopped by Blue Moon and I asked Kam to take the other girls for a walk while I enjoyed my chocolate milkshake with Rhoda.  Dailess was working and came over and sat down. She wanted to share something with me.  She shared of some difficult circumstances that her family was facing.  I won’t go into the details in this blog because they are personal to her.

“There is another Barista competition coming up. I don’t know when but I will let you know when I know,” Dailess told me.  After missing the last competition, I had wanted to be there to see her compete. I was at Blue Moon one day, and I saw them putting up signs for a barista competition. It was an in-house competition to see who would represent the café at the Zambia Barista Competition that was to happen in November.  Stephanie was asked to judge. I had class so I was out. Stephanie judged two baristas but wasn’t needed for Dailess.  We got a text the next day saying that Dailess had won. The Zambia wide competition would be in a couple of weeks. 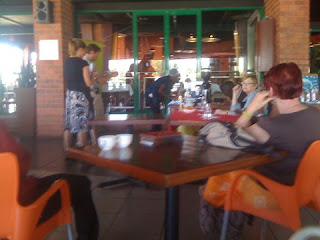 The competition was held at Rhapdody’s just a few minutes from our house. Dailess said she would text us when she was about to begin (We had learned that we could literally sit for hours if we showed up “on time” for something).  She texted saying, “Come now, I’m almost on.”   We gathered five children, shoes, clothes, two parents, car keys, shoes,(only one child didn’t show up with shoes...not bad.)   We made it just as she was preparing her station.  She finished, smiled at us and readied herself.  The four intimidating judges sat down, unfeeling, unsmiling.  The music was playing so loud.  Everything is loud in Zambia except the voices of Zambians.  She started her prepared speech, nervously twitching.  She practically screamed to the judges, 2 feet away. I heard only one word. Confident. She was confident in her signature drink, an espresso shot  with orange zest, liquid sugar and chocolate sauce, served with a small candied orange peel dipped in dark chocolate on the side.  She had to make her 4 specialty drinks, 4 shots of espresso, and 4 cappuccinos  in just 15 minutes. All of her other competitors saved their “specialty” drink for their last drink, but Dailess gave it to the judges first. “I wanted to be different,” she said.

And away she went, working hard, confidently.  The judges reveal nothing. They look, shake the cup, stir, sip. We watch nervously. Kamryn whispers, “Wouldn’t it be amazing if she won?”  I rolled my eyes. I just wanted her to do well. Make the top 6?  Don’t get your hopes up. “Yes, it would be so cool.”  So cool, because the winner was awarded not only the distinguishing notoriety of being the best barista in Zambia, but also would receive 400,000 kwacha ($80 dollars – or almost a month’s salary) and three all expense paid trips to represent Zambia in Ethiopia, South Africa and Austria.

She finished in her allotted time.  How did she do? No idea.  She breathed a sigh of relief.  Smiled nervously.  The girls swarmed her with hugs. Kamryn later told me that she saw a judge’s score sheet, and noticed it said under the cappuccino, “needs improvement.”  We saw Bob, the owner, there.  He was smiling proudly.  I said, “Thanks Bob for giving these girls a chance.  She would never have had a chance like this to compete had you not partnered with Chikumbuso.” He deflected my praise, pointed at Dailess, “It’s all her.”

It is important to note that Dailess has never had any formal training or schooling to learn how to make espresso. She works only two to three days a week.  She cleans houses, still.  And recently decided to give up her dream of nursing to get a diploma specializing in project management.  She has saved up 6 million kwacha or $1200 dollars (an unheard of amount for a girl living in the compound, a testimony to her drive and focus).   She filled out the application and was accepted. She would begin in January.

We received a call that night. All I could hear was my wife saying, “You made the top 6. Oh, congratulations!”  She would compete in the finals, tomorrow.  If the story ended there, it would be an amazing story.  Obviously, there is more. 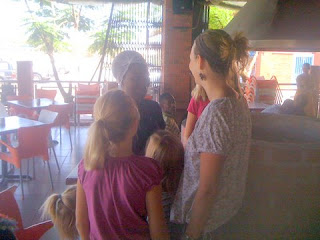 We didn’t make it to the Barista championship the next day because we were at horseback riding, a mere hour away.  We texted. We called. No return or anything. “How did she do?” my kids asked continually.  We were praying against hope that she would make the top 3. There was some good things that could come out of that. So, that night, finally, Dailess called. I hear my wife again, “You got first place. CONGRATULATIONS!!!”  Words on paper don’t really convey the joy we all felt then.  My only disappointment was that my kids were already asleep. I would have to wait 8 hours to tell them.

She was calling from home, late.  She had gotten home from the party to celebrate all the contestants and could finally call us.  Turns out, she actually left the party, her party, early, without telling anyone, because she was tired. Tired from the media, continually hounding her for stories and pictures and interviews.  Tired from the people.  She wanted to see her family.  She got a call at 10 asking, “Where is the champion? We need you here.”  She spoke timidly, but firmly. “No I am tired. You can interview me tomorrow.”

The calls came all day. From her boss who wanted to congratulate her again, and make sure she wasn’t leaving Blue Moon for another job, a better paying job.  When she got the call, she was cleaning a house.  Being a champion doesn’t change her faithfulness.  He said there were people who wanted to take her to dinner.  She chose us, instead.  Her church put on a special Mass just for her. 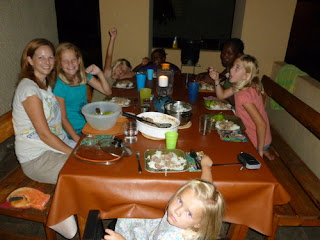 At dinner last night, she shared her conundrum. She wanted to go to South Africa and Austria and Ethiopia but she also wanted to go to school.  Coffee was nice but she has a future to look forward to and follow through with, starting in January. When the trips would happen.  Just like she doesn’t need fame, she doesn’t need adventures either.  Her family needs her. She shouldn’t go on trips when her family still suffers.   I shared with her last night that God had made her a champion. “Sometimes he closes doors, like you being a nun, with something hard, your sickness. But sometimes he closes doors, you going to school, with good things. He made you a champion, in coffee, and you will have an opportunity to meet people and improve this skill that you didn’t know you had, that you do have.”

Later that night, I was talking with Stephanie. She said, “I don’t know if she should go.  Who will go with her? Hold her hand?”  And it is true, the innocent, talented, hardworking young lady is really delightfully simple and innocent.  It is obviously not up to us, but, how many people would give this up? It testifies to her character of who she really is. In essence, how she handled the winning is actually the climax of this story.  No big head. No name dropping. No compromise from who she is or deterring from what she wants to accomplish in life. I have met few people who have done more with less.

Regardless of what happens, Dailess is a winner. And what a joy to be a part of it.
Posted by Steve at 12:27 AM

I love this story and look forward to hearing how it ends. May she experience blessing and provision in amazing ways. Hope you all are doing well! Hugs from Teas.